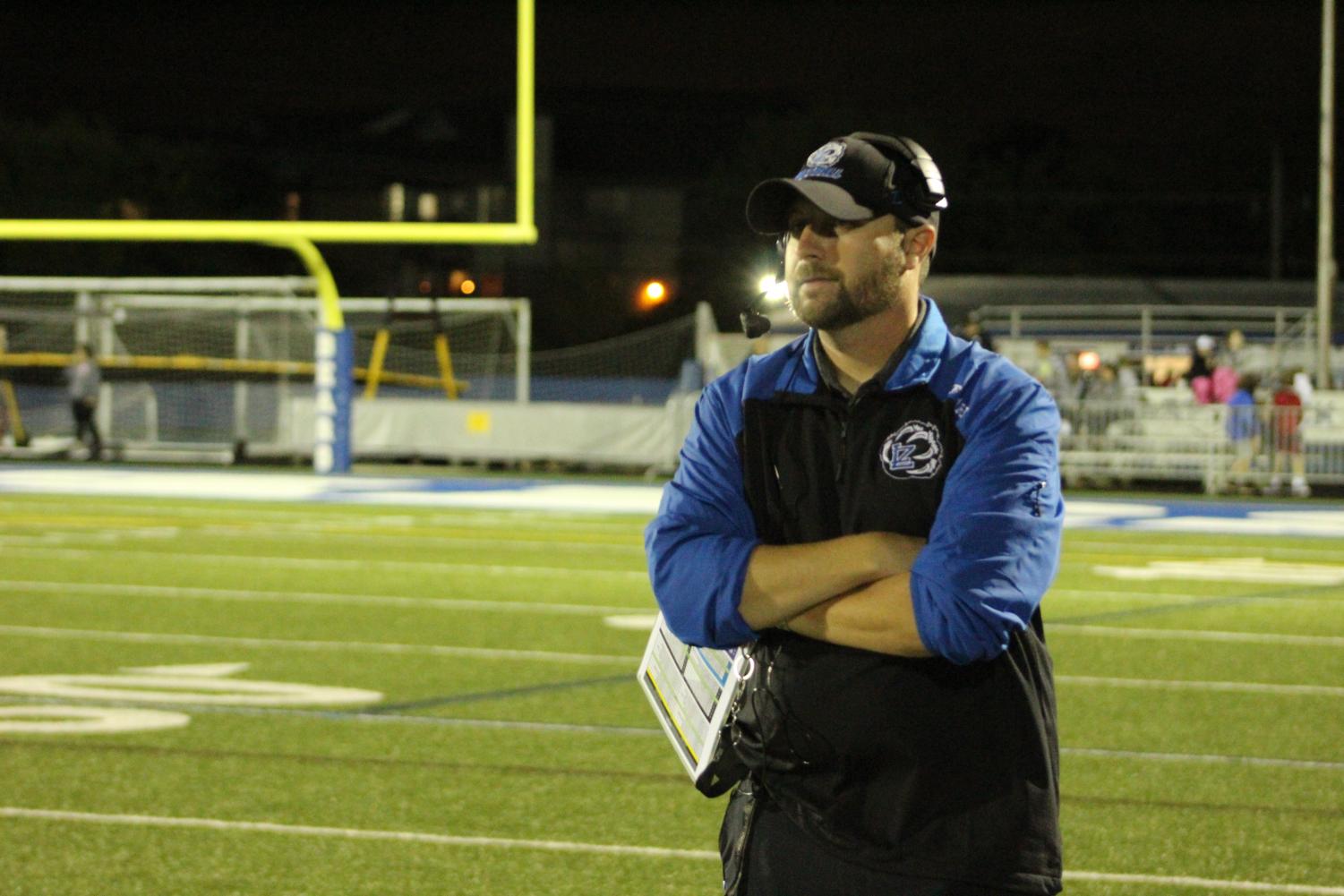 Ron Planz, varsity football coach, watches his players from the sideline. Although most of his prior football coaching experience was with college players, he says that the knowledge he gained then is invaluable in working with the LZ team. (Photo by Photo by Alex Ketcham)

Ron Planz, varsity football coach, watches his players from the sideline. Although most of his prior football coaching experience was with college players, he says that the knowledge he gained then is invaluable in working with the LZ team.

Photo by Photo by Alex Ketcham

It is a unique feeling to be in the stands of a Friday night football game, and an even more unique feeling to be on the 50-yard line of the football field, staring down the defensive line of the opposing team. But there is only one person who knows the feeling of standing on the sidelines and watching as his players put hours of practice to use, hoping that they will remember what he taught them.

“What’s been awesome about Lake Zurich is that it’s not much different [from college football],” Planz said, “There’s a collective want to get better. Guys like being coached. They want to be told how to get better at what they’re doing, they don’t mind being corrected. They work really hard, they’re really intelligent, and when it comes to football stuff, there’s a ton of support in the community.”

Where was he before?

“Up until January of this year I was the head football coach at Elmhurst college,” Planz said. “When we got new administrations, they decided they wanted to go in a different direction with football program, so then I had to decide, well, do I stay in the college football coaching which I’ve done for almost 20 years, or do I look for something else, whether it’s in coaching or not.”

Although Planz was offered three other positions that allowed him to stay in college football, he ultimately decided to go to Larkin High School for a semester, in order to avoid moving his family around. But when he received an offer “from a school such as Lake Zurich, with the tradition, not only from an academic side but a football side too, I felt like it might be a good fit.”

Despite the differences between working in a college environment versus a high school, Planz said that he’s been enjoying his new job, where he gets to merge his love for coaching with his newfound love for teaching PE.

“Going into [the school year],  I would have said I’d much rather be a football coach than a teacher, but I have been having a ton of fun teaching this first part of the semester,” Planz said. “But I realized that coaching itself is teaching. And whether you’re teaching skills or math or science or life on the football field, you’re always just teaching how to overcome adversity [and] how to push through uncomfortableness. I think I’ve always known that [teaching and coaching] were the same, but doing it now on a daily basis consistently really reinforced the parallels between coaching and teaching for me.”

Who was he before?

Before Planz became the guy with the playbook, he was the guy on the field with a football in his hand. From the time he was six years old to his senior year of college, Planz was a football player himself.

“I’ve always loved the game [and] everything it’s given me,” Planz said. “It kept me out of trouble, it forced me to focus on grades, and be a good student so I could go to college and continue to play. And then in college, it forced me to maintain my eligibility. I remember getting to my senior year and feeling like I didn’t know what my life would be like without this thing I’ve been doing since I was six years old.”

As it turned out, Planz did not need to say goodbye to football. Upon receiving his master’s degree from the University of Wisconsin Eau Claire, he jumped immediately back into the world of football, this time as a coach.

“I get my fix being a coach and being around young people who have that same joy and passion that I had,” Planz said. “ I wish I knew everything I know now back when I was a player, because the game would have been so much easier. But that’s part of the growth and part of the struggle and you know, hindsight is always 2020. Now, all I can do is tell the players that ‘look, I’ve been in your situation before, and here’s what you can try to do about it.’”

Who is he now?

Although the football team has been having a rough start to the season, Planz says that his overall goal is for the team to just get better.

“Every day, I want us to get closer and every day I want us to get better. If we just concentrate on taking it one step at a time, I think we will get to the outside expectations that everybody has for us. But if we just focus on those outside expectations, we’re going to skip important steps along the way,  and I don’t, I don’t want to miss any part of this journey with these players.”

Although Planz admits that outside of football, he does not have many hobbies and is “very boring in that way,” he says that the other important aspect of his life is his family.
“I’ve got a six-year-old and an eight-year-old,” Planz said. “My daughter’s cheerleading right now, and she’s really, really into that. She does ask me if girls can play football and I tell her, ‘absolutely. You can do whatever you want.’ My son is six, and [he’s] not quite into sports and things right now, but I just want them to be happy, you know? Like, if they’re going to be great violin players, great, and if they’re going to [turn out to be] football players or soccer players then yeah, as long as they’re happy.”