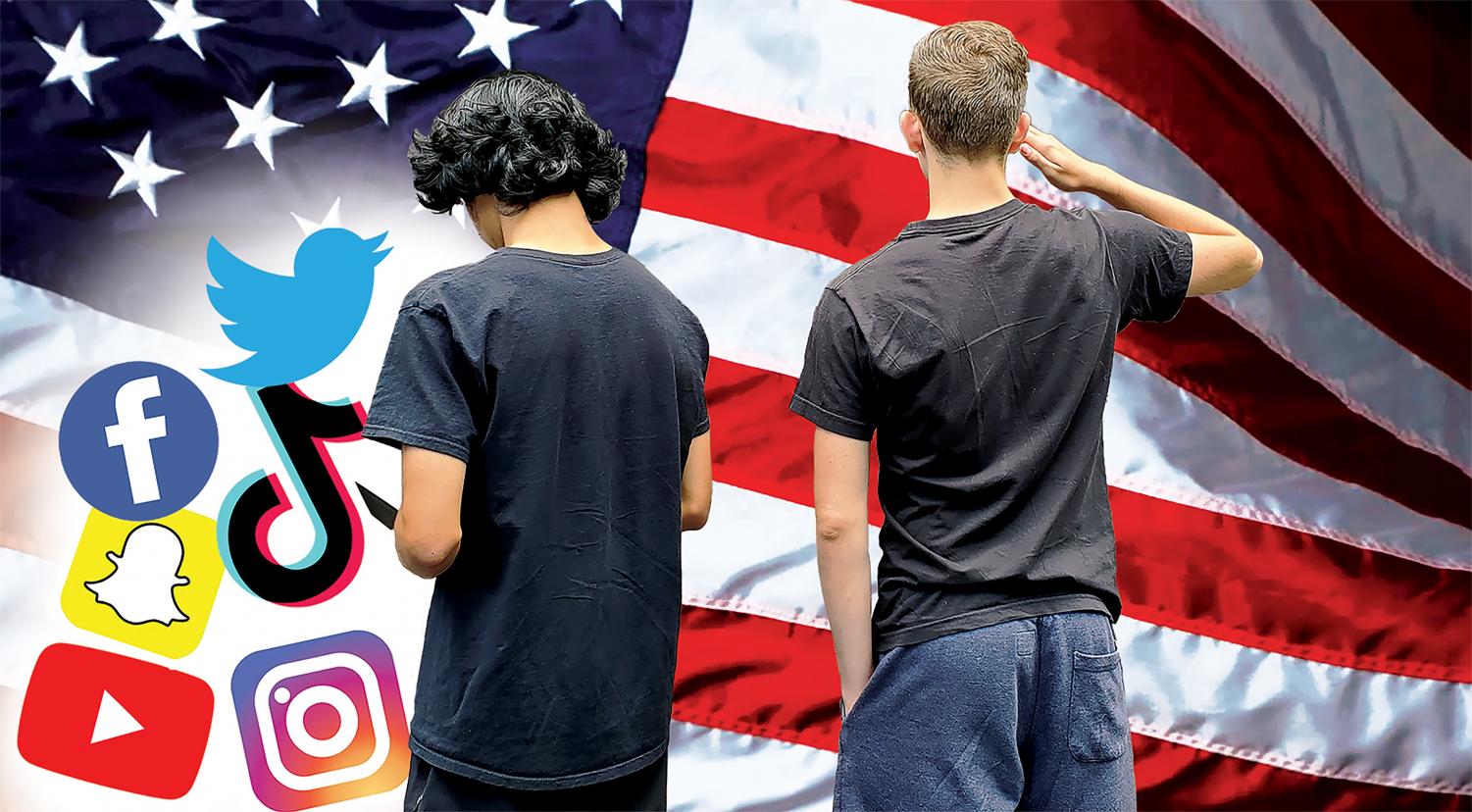 Every person has their own opinion regarding America, as well as what it means to be patriotic. “I grew up being taught about the privileges we have as Americans and how there are many communist countries out there where freedoms are limited, especially speech,” Grace Trumbull, a self-described proud American, said. “I guess I’ve always held onto that perspective and not let social media distract from America’s solid foundation, but I certainly think those who don’t realize this as much have let social media and the criticism of America get to them and change their whole perspective.” (Photo by Photo illustration by Sasha Kek)

Every person has their own opinion regarding America, as well as what it means to be patriotic. “I grew up being taught about the privileges we have as Americans and how there are many communist countries out there where freedoms are limited, especially speech,” Grace Trumbull, a self-described proud American, said. “I guess I’ve always held onto that perspective and not let social media distract from America’s solid foundation, but I certainly think those who don’t realize this as much have let social media and the criticism of America get to them and change their whole perspective.”

Give me liberty or give me posts

The effect of social media on student patriotism

Patriotism: the love for or devotion to one’s country.

Merriam-Webster Dictionary’s definition of patriotism has two parts: love for one’s country, and devotion to one’s country. However, according to a Gallup poll from June 4, 2020, American patriotism fell to the lowest it has been in two decades, with 42% saying they are “extremely proud” to be American and 21% saying they are “very proud” to be American.

“I think a lot of what we hear from social media and [social media’s] talk on America is negative, which definitely impacts people’s perceptions,” Grace Trumbull, senior and self-described proud American, said. “Although America definitely has its flaws, I think social media and our quick connections have got us bogged down in the details. It’s important to be aware of issues and occurrences, but I find that a lot of times we become hypercritical.”

Trumbull is not alone. In fact, 90.8% of students agree that social media does affect how students perceive America, with 61.5% saying social media imposes a negative perception of America on users, according to a Bear Facts survey of 348 students.

But although the majority of students believe social media does impact patriotism, Terry Geoghegan, social studies teacher, says that may not be social media’s end goal.

“I think people tweet things that might not be flattering to a president, just based on their opinion, I don’t think they’re trying to make America look bad. I think they’re just saying their opinion based on whatever event they’re reacting to,” Geoghegan said, “but I don’t think their overall goal, or social media’s goal in general, is to make America look bad. To me it’s an avenue of freedom of speech and saying what they think.”

Despite being avenues of free speech, however, Geoghegan recognizes that social media does promote the user’s bias based on what the user agrees with and prefers to read.

“The first day that you join [a social media platform], it’s asking you questions, ‘click this click that,’ ‘what kind of sports and politics you agree with,’ and I think from there people [put themselves in an echo chamber],” Geoghegan said. “Social media platforms, from what I understand in all the algorithms, are just giving you or sending you to sites that you already agree with, and I don’t think that’s healthy.”

One of the troubles with fast-spreading information comes from echo chambers, which are environments a person encounters that only include their beliefs and opinions, according to Oxford Dictionary. One way to avoid falling into these echo chambers and forming biases based on one-sided information is getting rid of social media accounts, Geoghegan said.

“Delete the apps and then try to find unbiased information,” Geoghegan said. “I like PBS, NPR, and CNN. They will provide information on both sides and I like that, whether it is getting quotes from a Democrat to get their stance on an issue, and then going to a key Republican; you’re getting both sides, and then you can decide which one you feel you agree with, or maybe you’ll find that they’re not so far apart.”

Freedom House, an independent organization dedicated to expanding freedom around the world, found that social media is not particularly “free.” In fact, the organization states online manipulation like fake news, bot accounts, and unjust censorship affects users’ perceptions of America. In a March 2021 survey for 18 to 29-year-olds from Harvard’s Institute of Politics found 61.8% of respondents said they were “very” or “somewhat patriotic”, and three-fourths said they had little trust in Facebook and Twitter, 35% of which claimed social media negatively impacted American democracy. And the continuous spread of information does more harm than good, according to Trumbull.

“I think social media definitely affects our perception of America because we are able to communicate so efficiently and quickly, so when something happens, we all [most] likely know about it [within a couple of hours],” Trumbull said. “This can be good and bad because although news and decisions are spread quickly and everyone can be informed, there is also misinformation out there that is spread just as quickly, which becomes troublesome and confusing.”

But getting biased information is not the only problem. According to Trumbull, she has noticed a decline in student appreciation for America because social media displays a lot of negativity.

“I’ve heard so many people say, ‘I hate America,’ ‘I’d rather live there,’ ‘I hate it here,’ and I really think social media has influenced their perspective. Don’t get me wrong, it’s definitely important to be aware of what’s going on in America and in the world, but I think people let all the critiques determine if they think [America is] a good country or not,” Trumbull said. “Instead, I try to view it as yes, things go wrong, and yes, there are certainly many flaws in the system, but overall our founding fathers formulated an amazing democracy with freedoms and ideals that have let us build ourselves up to be the most powerful country in the world.”

One of those freedoms includes the freedom of speech, which Geoghegan says he recognizes is the main purpose of social media platforms, as it allows everyone to have their own opinion regarding their “perfect America.”

While everyone may have their own view of what makes a perfect America, Trumbull says it is still important to appreciate the country and the freedoms it provides for all Americas.

“I think many forget about what a privilege it is for us to be able to give our own two cents on anything we’d like and not have any major repercussions,” Trumbull said. “Social media has allowed critiques and talk about issues to become such a norm that many forget how privileged we are to be living in America, where there is democracy and free speech.”