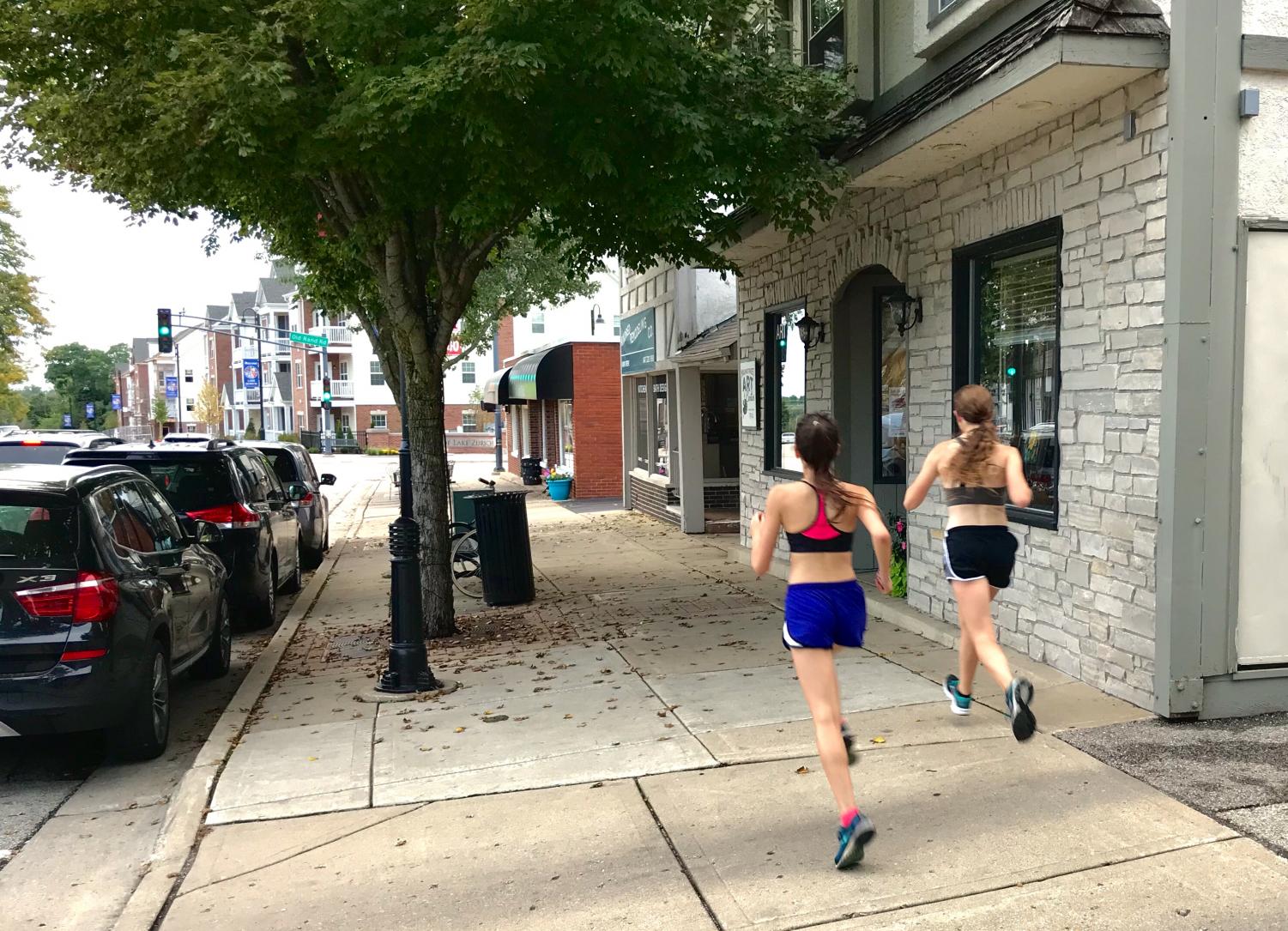 Two members of the girls cross country team run through downtown LZ. Even on runs like these, female runners say that they have to stay cautious of any threats that may come their way. (Photo by Photo by Caroline Sun)

Two members of the girls cross country team run through downtown LZ. Even on runs like these, female runners say that they have to stay cautious of any threats that may come their way.

Photo by Photo by Caroline Sun

When a girl laces up her running shoes and starts her watch, her expectation is that of a workout, one that will make her feel better after she is done. She is prepared for the harassment of a passerby, but she definitely does not expect for that harassment to lead to her death.

Such was the case of Mollie Tibbetts, a 20-year old University of Iowa student, who went for a jog in July 2018 and never returned. A month later, it was discovered that she had been killed by a man who had followed her in his car.

With this issue brought to light, women across the globe and here at LZHS have been inspired to speak up about their reactions to the Tibbet’s and their concerns for their own safety.

“I’m a runner and I plan on going to Iowa as well, and it’s just very upsetting to hear about something like this happening,” Tia O’Malley, senior cross country runner, said. “Running should be a fun thing, but often times, it’s very scary to go running alone when you’re a girl because people will honk and yell things at you and  you just feel really uncomfortable running by yourself [because] you always hear stories like this, [which] just heightens that fear.”

For O’Malley, however, the worry of an instance like Tibbetts does not come from news stories alone. She, like many other runners, has had personal experiences as the victim of strangers.

“There was this time when [me and a few girls on the team] were right by the high school, running in downtown Lake Zurich, and it was a really hot day so we were wearing tank tops and stuff [when] some guy rolled down his window,” O’Malley said. “He started screaming at us, yelling stuff like ‘hey, b-word!’ and it was kind of uncomfortable and really scary because when you’re in the downtown [area], those cars are so close to you so you can see exactly what the person looks like. We didn’t really know how to react, just kind of nervous-laughed it off, because how else are you going to react [to something like that]?”

Indeed, 43 percent of women at least sometimes experience harassment on the run, according to a recent RW survey, compared with just 4 percent of men. In the vast majority of cases, it’s not life-threatening. But it is pervasive, and it’s upsetting, and it’s most likely happening to you or someone you know.”

Like O’Malley, Sarah Monoson, junior cross country runner, says she has also had negative experiences while running, where she has been catcalled while running. For her, the words that people yell “makes me feel like an object, because they just have no respect for us and it makes you feel a little bit worthless in a way.”

While harassment is a problem of its own, it also highlights the different encounters that males and females experience. According to Monoson, it is no coincidence that a survey by Runner’s World shows that while 43% of women had faced harassment on their runs, only 4% of males had dealt with the same thing.

“We are obviously usually smaller than the guys and easier targets,” Monoson said. “That’s just the stereotype I guess and it’s how we’re portrayed, as weaker I guess, but I think that it doesn’t matter who you are or gender you are. Everyone should be more worried about safety because this could happen to them as well.”

It is for this reason that Monoson takes many precautions whenever she goes out for a run. Whenever Monoson goes out alone, she says that she is careful to  “always have my phone with me, text my parents whenever I take breaks, tell them the route that I’m running, and always go in the daylight.”

For O’Malley, the safety procedure is very similar.

“It’s just become a norm [for me],” O’Malley said. “When I run, never in the past have I not been aware of what’s going on around me [because] you never know when something or someone bad will come along.”

However, this extra caution does not just apply to solo runs. Even together, the girls cross country team, which often runs off campus, has many safety procedures in place to safeguard against the threats that the girls may face on the streets.

“We will all try to run the same route, we always check everyone out after practice to make sure everyone’s accounted for, we always tell everyone to be with a running partner or someone they can see while they’re running, and we always tell them not to talk to strangers,” Randal Dunbar, head girls cross country coach, said. “The bottom line is safety for the girls, so that no matter what happens, whether it be injury or weather or creepy people, the girls are safe.”

However, no matter how many careful policies are put in place, there is always still a chance that someone could be harassed, or in the case of Tibbetts, murdered. That is why, according to Dunbar, there is no perfect solution to the problem.

“I think that it’s unfortunate that it happens, and I think that there really isn’t a whole lot we can do about it, but we can take steps in the right direction,” Dunbar said. “Because of social media and the internet, we’ve done a better job of getting the word out there and helping [prevent] these situations. The information is getting out there better, we hear about it more, and all that helps us protect runners more […] As a society, [we are] being more aware of these situations and as everyone learns to respect each other more, maybe things will [change] for the better.”