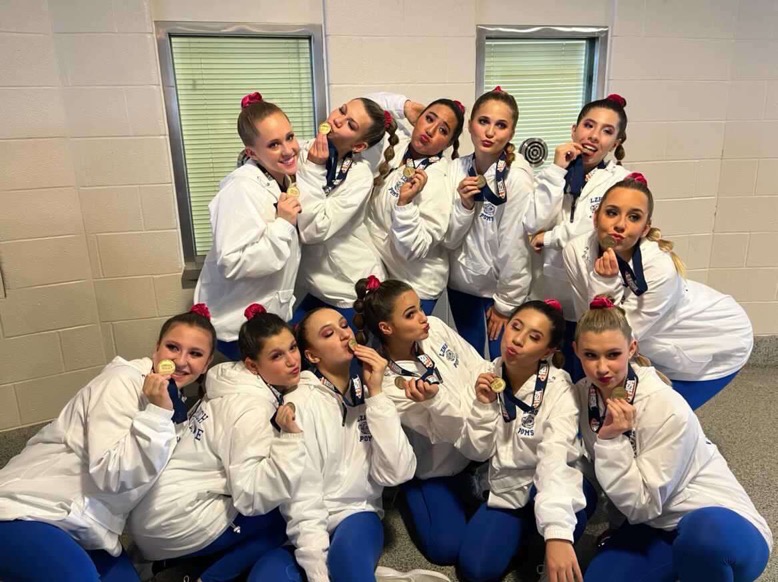 LZHS Poms members hold up their medals after placing first in state. (Photo by and used with the permission of Gillian Kramer)

LZHS Poms members hold up their medals after placing first in state.

Photo by and used with the permission of Gillian Kramer

The road to victory

After many long days of practice, and meticulous touch ups to their dance routine, the Poms team placed first at state and earned their spot as 12th in the nation.

Their journey to state began with Sectionals where the team placed second. Poms left on Thursday, January 27th, for the State Finals that would take place on January 28th and 29th.

“[The poms team] was all very excited for state but also very nervous. We were all so happy that we actually made it to state, and that we would be able to dance together a few more times,” Grace Bathery, senior varsity poms dancer, said.

Included in the excitement of being at state, the atmosphere was also full of

nervousness, according to Gillian Kramer, junior varsity poms dancer, “state is probably the most nerve wracking experience in the entire world.”

The team started out strong  with their first performance scoring enough points to advance to finals.

“Day One of competition at awards we were told we were going to state finals, and only the top 12 teams go, so we were all freaking out,” Kramer said. “But then our coach came up to us with the day one scores and told us we were in first place as of that day and our whole team started crying because we finally realized our dream of winning was actually possible.”

On Day Two, the final day of state, the dancers prepared to step onto the floor one last time and perform their hip hop routine. The girls felt many nerves but were happy with their success in comparison to the first day at state.

“The seniors gave us a huge pep talk right before we went on and the excitement and energy between all of us was so raw and pure, it was amazing,” Kramer said. “Right after we competed we got to watch our performance backstage, and we were all crying because of how much we had improved from day one.”

The team then headed to results and waited in anticipation until they were officially announced state champions.

In addition to the Poms team making it to state, the Lake Zurich Cheer team also qualified for state this year.

The girls competed in the beginning of February left in Bloomington, Illinois. The team ended up placing 16th at state. The cheerleaders gave it their all for their last performance of the season.

“State was honestly such an enjoyable experience and I am so grateful we got to all compete together, especially since this was the seniors last competition,” Sierra Austin, junior varsity cheer member, said.

“We were all so excited and grateful. We worked so hard and it felt amazing to see all that work finally pay off,” Bathery said.

The moment the dancers realized they had won was “probably the most surreal thing I’ve experienced. It was like time stopped for all of us. It still doesn’t feel real,” Kramer remarked.

But the hard work did not stop there as the team had less than one week after state to prepare for nationals in Orlando, Florida.

“We only had less than a week before we left for Florida this year. During those few days we obviously celebrated the huge accomplishment we had just gotten at state, but we never stopped working for nationals,” Lindsey Neurauter, junior varsity poms dancer, said.

After the first day of competition at nationals, the poms girls qualified for finals.

“On finals day we get to compete on the floor with the castle background. If you are a dancer you would understand how iconic the castle is and when you get to walk under it as you take the floor,” Neurauter said. “The best college dance teams do this every year and it was a surreal experience for myself because it is a goal of mine to be on a college dance team one day.”

The dancers placed 12th in the nation and Bathery says they were “extremely happy and proud of [their] success.”

“Obviously you always want to place higher, but we did all that we could. We competed such an amazing routine and were against the best hip hop teams in the nation,” Neurauter said. The anticipation and joy the poms season brought the girls had unfortunately ended, but the team’s unbreakable bond did not.

“I consider every single person on Poms my best friends, it’s just so amazing to get to know people who love the exact same things you love,” Kramer said. “We practice a ton, which can get super tough and tiring, but it’s always a blast because of how close all the girls are and how much fun we have joking around.”