Leaders encourage students to 'look like an idiot every Friday' 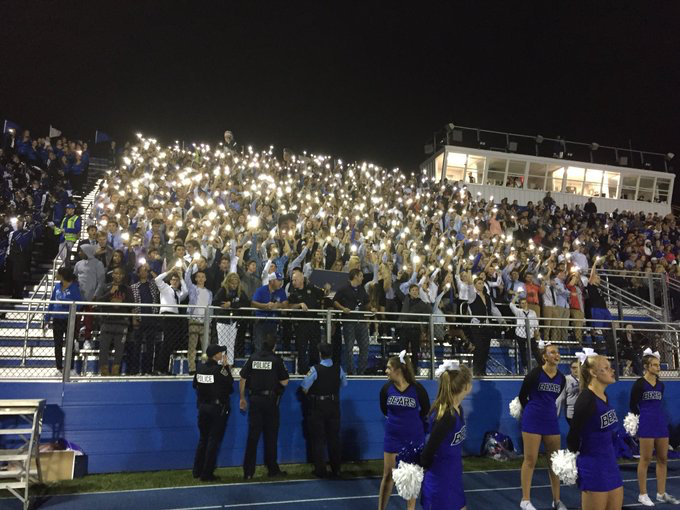 Photo by Photo by Caroline Sun

The student section puts the light in ‘Friday Night Lights’ during the August 24 football game against Fremd. The Bear Den cheered the team onto a 20-7 victory.

Student sections are meant to be obnoxiously loud, and extremely hyped up for whatever they are cheering on. The Bear Den, the student section club, aims to do just that.

The Bear Den, just like many other clubs and activities, will be making a few changes specifically to the student section at football games, in order to better hype up the crowd and support the team, according to Tyler Snep, senior Bear Den leader.

”I think [the student section] definitely brings another element of energy,” Snep said. “I don’t play football, but a lot of my friends do and it just brings [another] element of energy to not only us, but for [the team] and gives them an extra boost.”

Possible changes to the student section at football games include the addition of a fog machine, new cheers, t-shirt toss-ups, a modified version of the 5-Star app (the app used for tracking what events students attend), and more official incentives to get students to attend events like fan of the week, or fan of the month, according to Snep

“We are going to be more on top of the cheers because a lot of times during the third and fourth quarters our leaders last year would lose focus and not continue cheering as much,” said CeCe Cunnion, senior Bear Den leader. “We are trying to do some more interesting things.”

Last year, the student section leaders made an effort to expand the Bear Den into more than just about football. This year, the leaders intend to build upon that idea even further, Snep said.

“We have a student section unlike anyone else around,” Snep said. “We’ll get 1000 kids at games, which is absolutely unheard of. So we’re trying to expand off of that and create that same excitement around other stuff”

The Bear Den will also be more than about just supporting athletics. In fact, the leaders are making a large effort into supporting every club and activity in addition to sports, Cunnion said.

“This year we are not just a student section for athletics. I know that the idea last year was that we would expand more, but we didn’t really do that,” Cunnion said. “We are going to be there for every single club, every single sport, and every single theatre production”

“I look like an idiot every Friday. [We want to] set a standard that it’s absolutely okay to go crazy. We’re trying to say, ‘Try and beat us’,” Snep said. ”The more people that go full out, the better it looks. Go as full out as you can and if you can go crazier than us, that’s impressive, so try it.”

The idea of dressing up also shouldn’t just be about upperclassmen either, said Ian McGee, senior Bear Den leader. The leaders want to emphasize that underclassmen make up just as much of what the student section is as upperclassmen do.

“[Underclassmen] don’t realize how fast high school actually goes by. So you want to make the most out of every opportunity and go to as many events, and go to as much school spirit things as you can,” McGee said.

Getting underclassmen hyped up to go to the games is process that the leaders will take on, Snep said. However, since this is the first time the Bear Den leaders are leading the student section at games, they have to learn how to lead at the best of their ability. Luckily, the schedule works out for them.

“I think it is a blessing [having home games first] because I think there’s a lot of stuff we’re trying to do and change and add in. We have a couple weeks in a row to get it right. In this way we can make games more exciting. By the time you get to that fourth home game, you just hope that everyone is all-in,” Snep said. “Having the first four weeks to build that at home [allows you to] encourage it to carry it over when we go to Warren or Stevenson.”

Overall, the Bear Den intends to support the school and everyone apart of it in anyway. The goal is that football games allow the student section to grow into something more than just football, according to Cunnion.

“We acknowledge that there are other sports, and that other sports are equal, and we want to be present at every single game we can possibly be no matter what sport it is but the main reason we have a student section is that people go to our football games,” Cunnion said. “If we can get people to start going to other activities as well, great.”