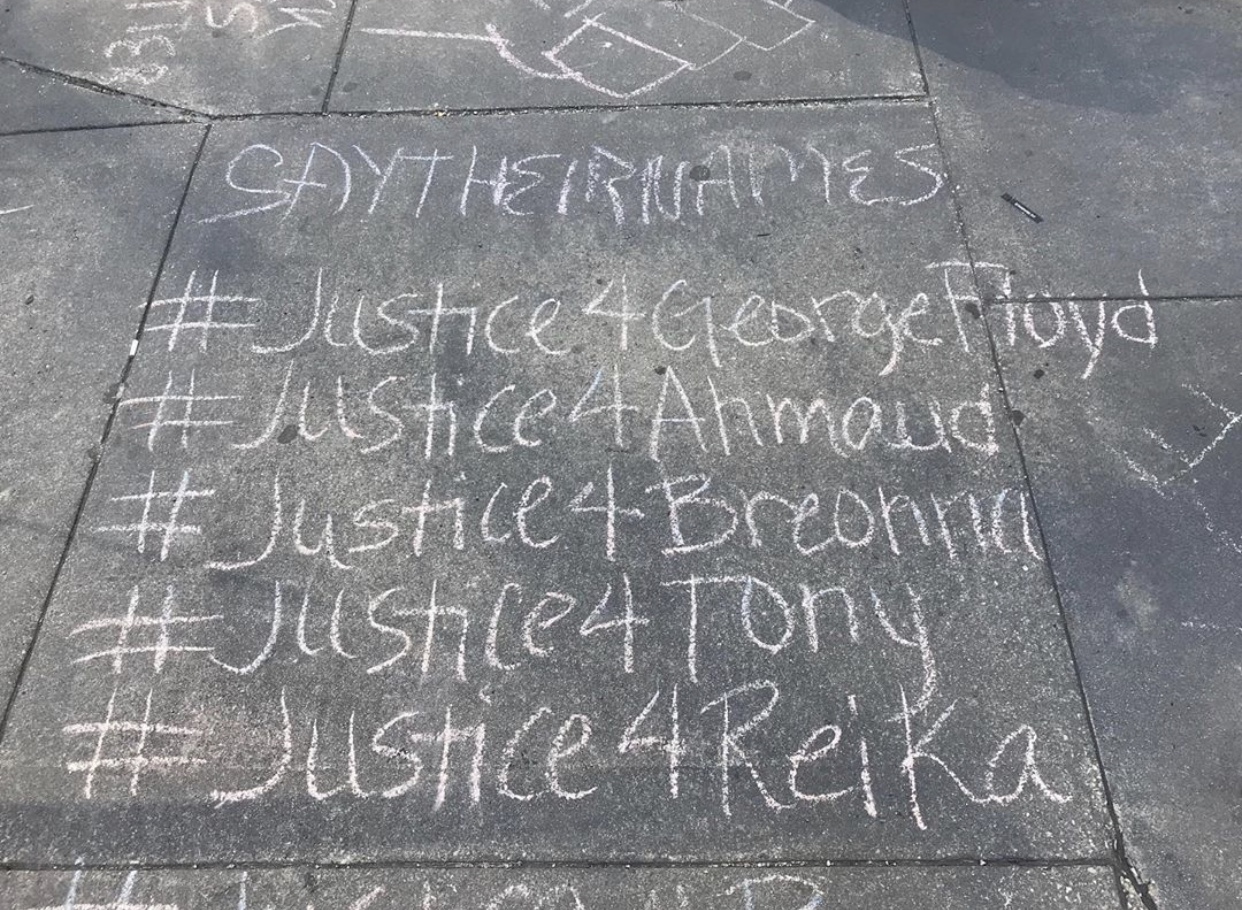 When Sofia Stavins, junior, went to protest for black lives matter, she noticed a lot of support being given to the black community, Stavins said. She hopes she can help make a change, Stavins said. (Photo by and used with permission of Sofia Stavins )

When Sofia Stavins, junior, went to protest for black lives matter, she noticed a lot of support being given to the black community, Stavins said. She hopes she can help make a change, Stavins said.

Photo by and used with permission of Sofia Stavins

People across the nation have been protesting for the past six days against injustice, police brutality, and racial inequality.

The May 25 arrest and subsequent death of George Floyd, a Black man, sparked protests that started in Minneapolis, the place of Floyd’s arrest, and soon spread to Philadelphia, Chicago and even cities like Des Moines. Citizen reporters, along with professional journalists, have shared images of the unrest shaking the nation, and hashtags like #blacklivesmatter and #icantbreathe are trending on social media. While Lake Zurich and its surrounding area have not seen protests first hand yet, a LZHS alum is planning a peaceful protest for this Thursday in Lake Zurich downtown.

While protesting may not be in everyone’s comfort zone, LZHS students are proving there are many ways to get involved in advocating their viewpoints. Whether it may be advocating on social media, organizing fundraisers, or even attending protests, the end goal for these students is the same: bring equality and justice for all, regardless of their skin color.

Sofia Stavins, junior, said she wanted to take part in peaceful protests in hopes to have her voices heard. Despite the media showing violent riots, the protest she attended in Chicago on May 31 was peaceful and eye-opening, she said.

“My experience at the protest was very emotional. It felt like everyone there was one big family and we all had each other’s backs. I feel as if I was a part of something life-changing and extremely important. It was a very peaceful protest and I would do it all over again,” Stavins said. “Everybody needs to use their voice. The thing is people think that they don’t matter and they couldn’t make a difference. But then you have to think about everyone else who thinks that way, and eventually you have hundreds of people who think their opinion doesn’t matter. Everybody’s view matters.”

We need to make noise and bring attention to this problem. We need change. And I will go to any length to make sure that happens.”

Stavins said change is dependent on people’s actions and she is willing to fight for that change, she said.

“It’s a reminder that the people have the power, not the government and for me personally, it’s really empowering,” Stavins said.

Although some argue internet advocacy does not bring forth change, Marissa Drake, junior, says social media is a great way to spread the news and bring awareness.

“I’ve tried to speak out as much as I can through social media. I’ve retweeted videos of violence on both the cops’ and the looters’ side, I’ve tried to post as many tips about protesting that I can. I’ve signed petitions and texted [different numbers to take action]” Drake said. “I’ve just tried to use my privilege as a white person to speak about the obvious injustice that our own POC sisters and brothers have to go through.”

By using her social media platform and spreading the message, she says she hopes people will learn or realize the injustice people of color face every day. She wants the best for the future, Drake said.

“I hope that eventually, we don’t have a bias toward our cops when it comes to murdering POC. I hope that we can break the injustice that is so plainly obvious in our judicial system,” Drake said. “I hope that POCs and children of color can stop being so afraid of cops and that parents that are POCs don’t have to teach their children to be extra careful around cops so that they don’t get murdered for a simple misunderstanding.”

During this time, people have also been organizing ways to earn money to fight the injustices in their communities and across the nation.

I just hope people realize that anyone can make an effort for change. I hope for social equality among all races, and I hope we can progress to a point where no one even needs to remind one another that Black lives matter.”

One group, in particular – the LZHS runners – are fundraising to help raise money for the Chicago Community Bond Fund, “[an] organization [which] supports people who have been jailed for peaceful protesting and cannot pay bonds themselves,” said Kyle Gilboy, a 2019 graduate.

“We wanted to raise money for people in the streets right now, but we wanted an incentive to give another reason to donate. My friends and I are, for the most part, alums of the Lake Zurich Cross Country team so we decided to use running as a medium,” Gilboy said.

For every $5 the group receives in donations, the runners will run a mile. The donations will help wrongfully jailed protesters, Gilboy said. He says he hopes to bring justice and help to the people who are fighting for the cause.

“I just hope people realize that anyone can make an effort for change,” Gilboy said. “I hope for social equality among all races, and I hope we can progress to a point where no one even needs to remind one another that Black lives matter.”