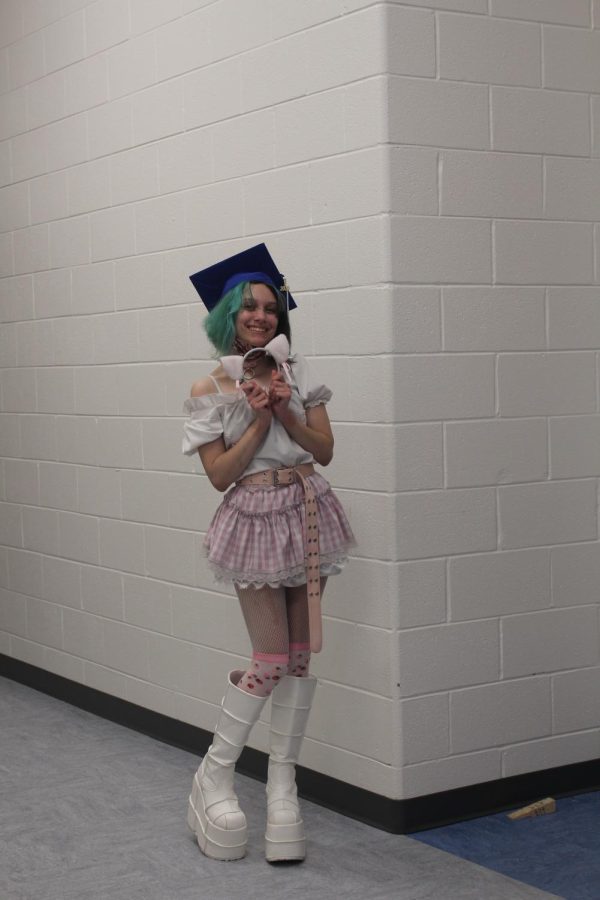 Living a passion for fashion

From colorful hair dye to the biggest shoes around, this super senior dresses in personality from head to toe with her/his whimsical outfits and creative ideas.

“I’m trying to express myself and my views. I want to inspire other people to not be afraid to wear whatever they want,” Lena Serafino, senior who uses both she and he pronouns, said. “I’m exclaiming that I’m there and it definitely does have an impact.”

Serafino says she/he made a goal for senior year to share her/his style with the world and attempt a new outfit everyday. Although she/he said she/he was not able to be completely original each day, Serafino says her/his black and green hair dye and alternative outfits have earned her/him more than a few glances.

“I’ve always wanted to express myself in a way that’s uniquely me because I feel like how you look, how you customize your avatar, is how people are going to perceive you and how people perceive you,” Serafino said.

Although she/he says she/he values how others view her/him, Serafino says her/his main goal is to be herself/himself. Her/his outfits inspire everyone around her/him to express themselves, including Kelso Schaeffer, senior and Serafino’s friend.

“I think that her/his fashion is very interesting. I like the majority of the outfits she/he wears, though sometimes I wonder how she/he can walk on seven-inch platforms,” Schaeffer said. “I’m very fond of her/him and her/his style. It actually inspired me to start expressing myself through fashion, [and] I even got myself a pair of platforms.”

Schaeffer says they admire both Serafino’s outgoing personality and outstanding outfits. Others, however, don’t have the same positive feedback, Serafino said.

Serafino says she/he has had more than enough experience with negative opinions. She/he says people can tend to make assumptions about her/him from the way she/he dresses.

“People need to start getting to know others by personality and not just looks,” Schaeffer said. “Lena taught me a lot about fashion and how society can be very limited towards styles that are not common.”

Schaeffer says Serafino uses her/his first hand experience in overcoming critics’ comments to help teach others how to handle the backlash. As for Serafino, he/she has had a lot of practice in learning how to respond to criticism.

“I try to not let it affect me because I know that people who judge me because of my fashion sense are probably not feeling like they can express themselves. A lot of times when people judge you based on your fashion, it’s because they feel jealous of your courage and confidence,” Serafino said. “Some people will definitely be judgmental and I can’t help that. It’s a blessing in disguise because people who are judgmental of me just because of my clothing, I don’t want to be around anyway.”

Despite learning to look past the hateful outlooks, Serafino says she/he can be her/his own biggest critic. She/he said she/he would avoid wearing an article of clothing to avoid seeming too repetitive and sacrifice hours of her/his morning to dedicate time for getting ready.

“Sometimes, if I’m having a day where I’m really anxious about my outfits, I’ll just be like, ‘Well, if I’m afraid about this, then that means that I have to do it,’” Serafino said. “Obviously you don’t have to do anything, but I feel like when I try and push myself, I allow myself to express myself in more ways than I would have allowed myself to before.”

Serafino says she/he pushed her/his own boundaries to improve her/his style and confidence. She/he says she/he encourages others to do the same with a ‘fake it till you make it’ attitude.

“Don’t let people’s judgments hold you back.” Serafino said, “I know it’s not easy and you’re gonna have some anxiety about it but if you want to do something and you want to express yourself a certain way, don’t worry about how other people are gonna judge you. If people judge you for that they’re judging you for you and if people don’t like that, then you don’t want them in your life anyway.”