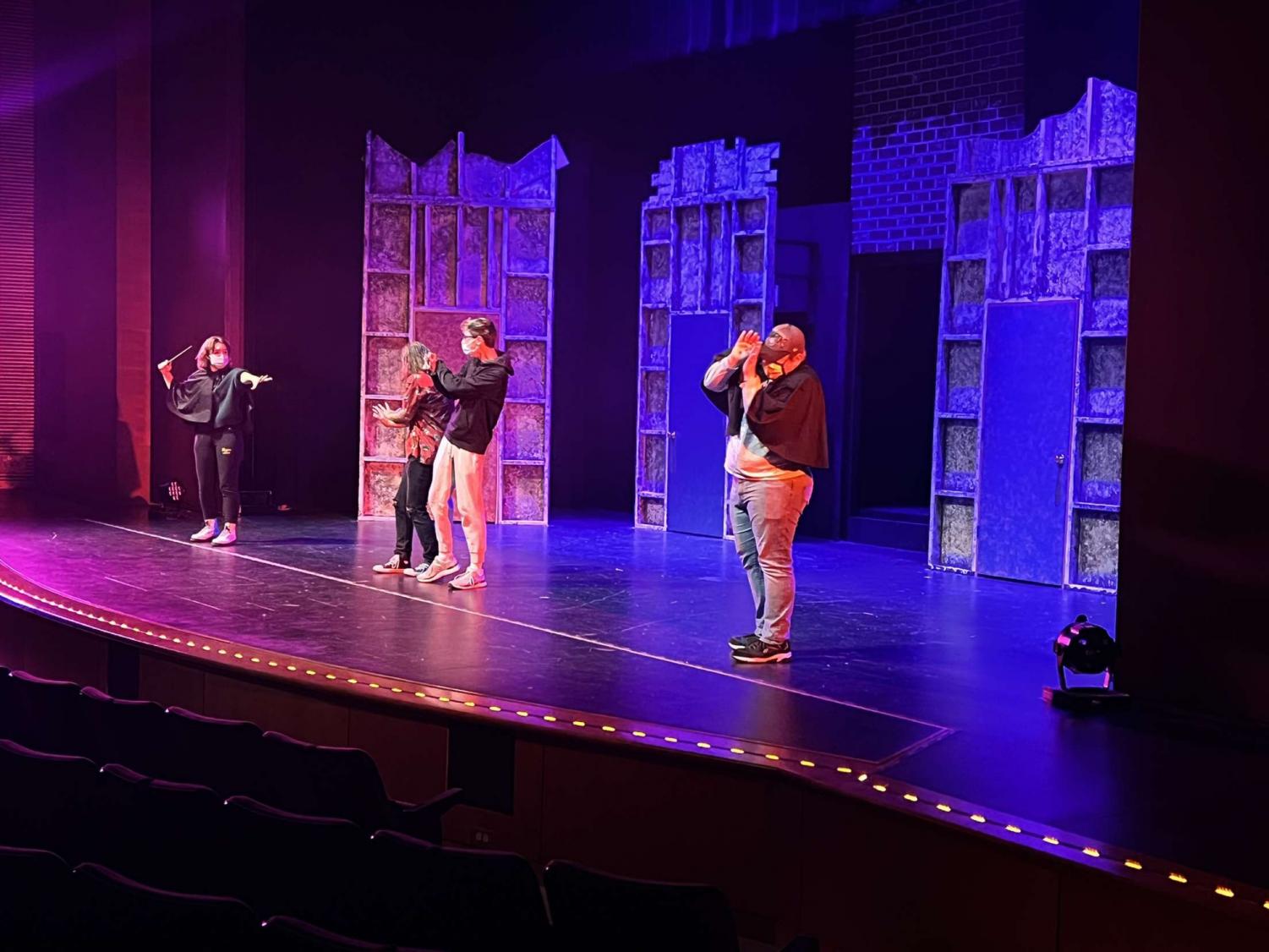 The cast of Puffs rehearses on stage for the upcoming show. (Photo by Ruhi Majumdar)

The cast of Puffs rehearses on stage for the upcoming show.

The magic is back

Enter into the world of wizards and witches where you will be welcomed by magic and whimsical scenery. This year, the Lake Zurich Theatre Department presents Puffs on November 4 -6.

Puffs, or Seven Increasingly Eventful Years at a Certain School of Magic and Magic, centers around a certain yellow house that never got their chance in the spotlight due to a certain other boy wizard.

“The play is about the Puff’s house throughout the years at the school of magic and what life was like for them while crazy events unfold around them,” Caitlin Rasbid, senior, said.

“It’s a story about a trio of friends growing up and finding a place where they belong. You can expect to see a lot of shenanigans, crazy characters, evil wizards, and most of all, fun, lovable Underdogs.”

Puffs takes place “in a faraway school in England, where the puffs are learning magic as they grow up,” Rasbid said. The puffs are one of the four houses (Puffs, Braves, Smarts, and Snakes) at the School of Magic and Magic, and tend to be “neglected when compared to other wizard houses,” Matty Winiarz, junior said.

“The puffs represent a group of all us who have ever felt invisible, and who eventually come to realize it doesn’t matter what the world thinks of them as long as they have each other,” Rasbid said.

One of the main members of the Puff’s house is Wayne played by Winiarz. Wayne is a “boy wizard who is also an orphan. He finds out that he’s been invited to a certain magical school, except he is part of the puffs,” Winiarz said.

“I enjoy kind of the eccentricities or the normal-ness [of Wayne] because I usually play really out there and extreme characters. I like playing semi-normal characters and still finding ways to try and make them fun,” Winiarz said.

Starring alongside Winiarz, Rasbid plays a character named Harry who is “the chosen one everyone knows and loves, who fights evil and saves the day,” Rasbid said. “In this story [Harry] is not the center of attention despite how often he ends up in the spotlight. [Puffs] depicts a very silly, air-headed version of the boy.”

The theatre department landed on the play of Puffs due to it being a story about “overcoming adversity when it feels like life is out of your hands,” Rasbid said.  The “funny, heartfelt, and nostalgic,” aspect of Puffs according to Winiarz, makes it a play worth watching.

“People should come see puffs because it’s a really funny play. It is a return to form for the theatre program and has an amazing set and great cast. The entirety of the play is a nice glass of nostalgia which is nice to have during these times,” Winiarz said.