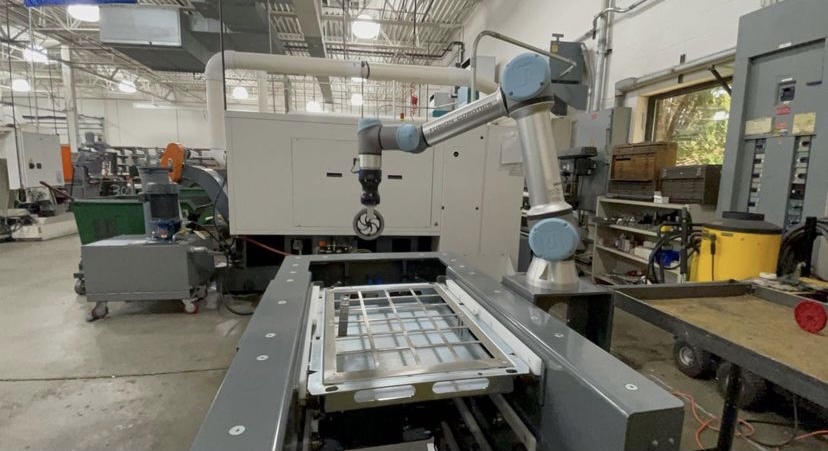 At 18 Manufacturing, Anand works with a robotic arm to further his engineering experience (Photo by and used with the permission ofArmaan Anand)

At 18 Manufacturing, Anand works with a robotic arm to further his engineering experience

Photo by and used with the permission ofArmaan Anand

A step into the future

Students participated in internships over the summer, getting more experience and knowledge into their future field of interest

During the summer, several students took a step into what their future career may look like by participating in an internship. By using the High School Roadmap course on Canvas, students applied and were selected to continue studying their area of interest.

“When [students] step outside the classroom and get to actually do the job and learn by doing, that is just a fantastic way for somebody as a student to understand what it looks like to be a psychologist or to be an engineer,” Beth Slaughter, district development coordinator, said.

One of the students who partook in an internship this past summer was Nicole Rogus, junior. Rogus participated in “the neurotherapy internship at cerebrum neuro-therapy and neurofeedback.”

“I decided to do an internship because I felt like it was a good opportunity for me  to pursue something that I’m interested in, that is in a real world setting alongside  patients, and getting used to communicating with people that have the same passion  as I do.””

Along the way Rogus picked up on many new skills and furthered her knowledge in the medical field by getting the opportunity to take part in real world events. “I mainly focused around communication and being able to communicate with adults and people in a professional setting,” Rogus said. “For example, I had to take insurance calls and also be able to talk on the phone with people through community outreach, and try to get referrals from patients for the company.”

The internship overall helped begin to pave the pathway for Rogus’s future, she says, and helped bring light onto her true passion and the new skills she will take with her in the future.

“[The internship] connects to a very similar path that I want to follow in the future and I think that not only have I gained new knowledge to help me in the medical field, but I also know now how to handle different situations in professional settings which I feel is a key thing in life,” Rogus said.

Similarly, Armaan Anand, senior, engaged in an internship at “18 Manufacturing, an engineering firm.” Anand got to “learn everything about the manufacturing industry.”

“Since I have been taking engineering in school, I wanted to continue learning about computer aided design or CAD and how to use that to make models of products,” Anand said. “I wanted to see the robotics side of it and how that connects to manufacturing industries and explore more in depth with my field.”

During the internship, Anand got to work and use robotics on a whole new level then he has been able to previously.

“One of the things I got to work with was an industrial robotic arm with the fusion robotic team company,” Anand said “They have robots on [computer numerical control] machines where we get to do programming, so I programmed it to inspect the creation of the product and packaged them.”

Anand’s experience working in the internship assisted him in thinking about what he wants to pursue in the future.

“[The internship] increased my interest in robotics and engineering and now I want to do more in depth at home and in school as well as in college. It made me want to be more involved in the robotics team and the engineering club in high school and take that new knowledge and use it even further,” Anand said.

Students such as Rogus and Anand were able step foot into their fields of interest in action because of the internships they were a part of. Internships are “opportunities that allow juniors and seniors to take the next big step in their career path and begin to see what they could eventually be doing on a day to day basis,” Slaughter says.