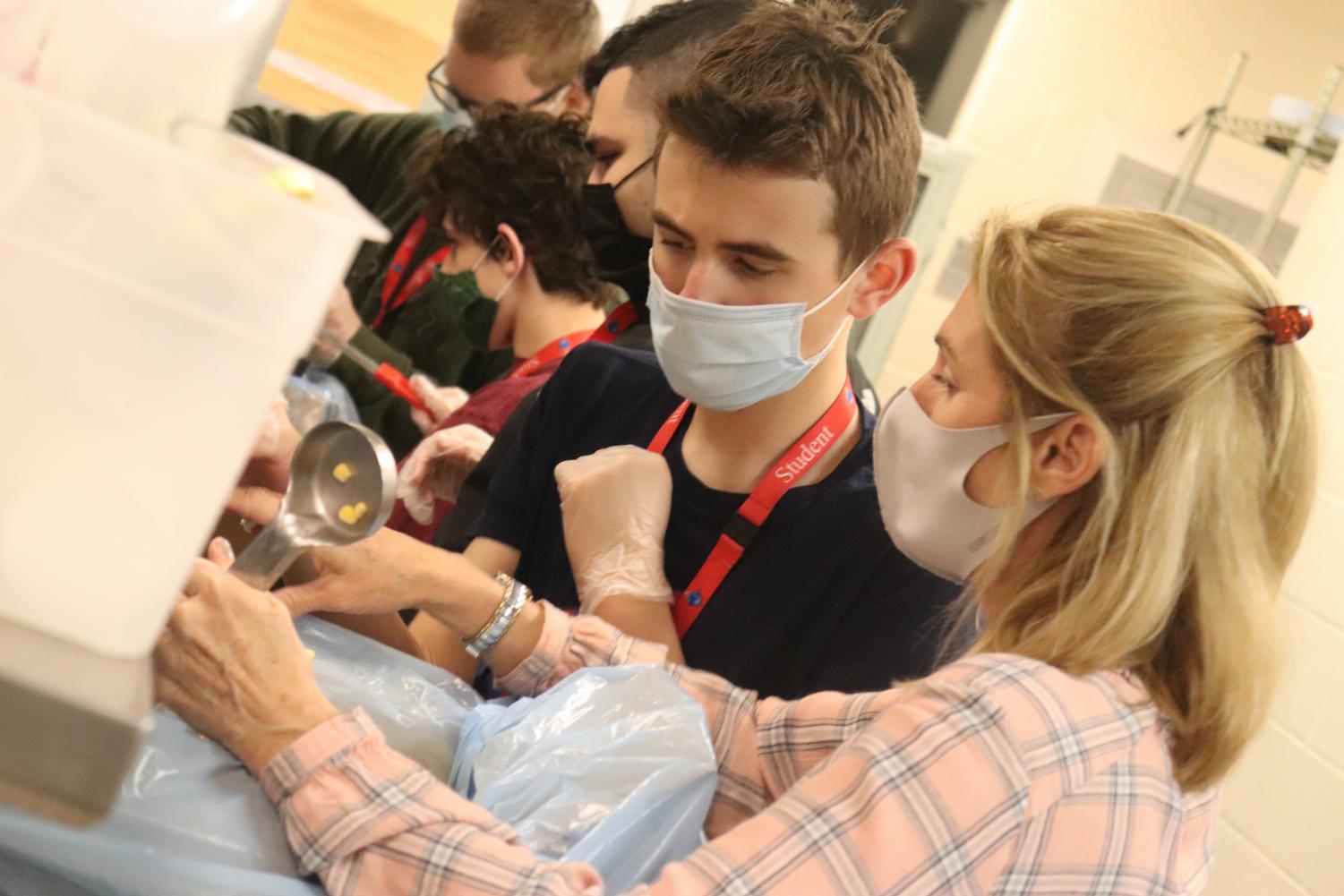 In late March, when schools locked their doors and businesses shuttered their windows, workers were not the only ones affected – with the community shut down, levels of food insecurity within the district rose.

In 2020, roughly 45 million people experienced food insecurity, according to FeedingAmerica.org and for 2021, the projection for people who will experience food insecurity is 42 million, or approximately 12% of the US population. Parents lost jobs and students who relied on schools for daily meals were no longer getting them while schools were shut.

“There are many families in our district that are in need throughout the pandemic, whether it be because of parents who have lost jobs or who have had wages reduced,” Ryan Rubenstein, Assistant High School Principal of Student Life and Operations, said, “and so it’s an opportunity for us as a community to be able to help support them.”

With that mindset, District 95 expanded an existing program to help even more students in need.

A Community in Need

The financial instability caused by the pandemic can have an enormous impact on food security in American households. In fact, 46% of U.S households reported facing serious financial problems during the coronavirus outbreak, according to the Harvard T.H. Chan School of Public Health.

At the local level, 6.9% of Lake County, about 49,000 residents, was considered food insecure before the pandemic, according to Feeding America’s “Map the Meal Gap” interactive study.  In September, Patch News reported food insecurity in Lake County was predicted to rise to 11.9 percent by the end of the year, marking an increase of more than 71 percent since 2018.

During the average school year, District 95 provides meals to students in need as part of the National School Lunch Program, funded by the federal government. But when levels of food insecurity rose due to the pandemic, extra meals were needed to feed more hungry mouths.

“[Our goal] is just to keep everyone fed,” Kathy Taylor, food service director for the district, said. “After our last day of [normal] school March 13, we started the very next week, pivoting [to the] Summer Feeding Program, which made all our students eligible for free lunches. It started really fast but now it’s been going on for over a year and it [really is] the need that drove that [initial] decision and seeing how many families came.”

The current program, which began right after the pandemic hit, served approximately 500 kids a day during the summer, according to Taylor.  Now, although the summer is long over, the program continues “chugging along,” she says, “just according to the needs of the community.” This year, with more students back in school, over 2000 kids a day are being provided with food each day.

But more meals delivered meant more meals to prepare. When District 95 recognized the need to increase access to meals for families in need, the Transition program students were there to help.

Stepping In to Help

Normally Transition students spend their school days on worksites around the community, in fast-food restaurants, or in-office mailrooms to learn valuable work skills. But this fall, due to COVID-19, no students were able to be placed in jobs, said Peggy Freund, cafeteria manager.  Instead, the students began working together with Sodexho, the company that services the cafeteria, to package frozen meals every weekday during school hours this fall.

“Before the pandemic, [the Transition students] used to come in and help tray up Bosco sticks and cookies for us,” Freund said. “So when all this started and they couldn’t go out and were in school more, they asked me if there was a need for help and I said ‘yeah’, and they were a great help for me with all the food.”

The decision to help was easy for Charlie Sims, second-year Transition student.

“I would feel bad if I didn’t have food for my family,” Simms said, noting that he enjoys the work that he did this school year.

For each weekday, a family received two meals: breakfast and lunch. That means the Transition students had a lot of packaging to do, first putting the food on trays and then storing it in the freezer to keep fresh, Joseph McMahon, second-year Transition student, explained.

As part of their job training, students also learned how to follow proper precautions to ensure safety for the community and students.

“We wear gloves for protection, and we wash our hands and be all-around careful, especially around these times,” Will Burns, third year Transition student who worked on the project this fall, said.

For the students who worked on the project, they all agree: it was more than just a job. Making the food, they said, was just one way the students could show gratitude and compassion towards their community. With everything going on in the world, they said they felt it was right to help out.

“Once everyone pitches in to do their part, the community becomes a happier place,” Burns said.

The others on the fall work team agreed. They all said they believe that committing acts of kindness and giving back to your community makes the world a better place.

“[When we] help people who are less fortunate, it brings us closer as a community.” Andrew Koppel, third-year Transition student, said.

Dylan Kolodziej, third-year Transition student, agrees and said everyone can benefit from helping others. For them, knowing that they are making a difference by helping those in need, gives them a feeling of satisfaction.

“It makes me feel I’m doing my part for everyone,” Kolodziej said.

This spring, although many Transition students have gone back out to work within the community, Freund says that she is still working with some of the younger ones to continue building their skills, all while they help out their community.