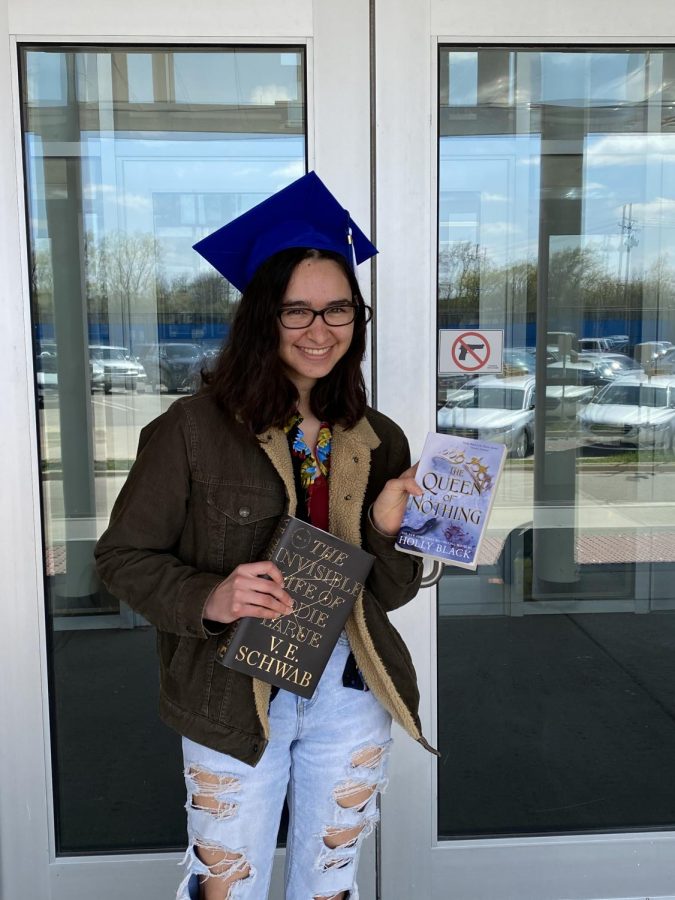 Bella Brunke, senior, holds up two of her favorite books, “The Invisible Life of Addie Larue” and “The Queen of Nothing”

Bookworm writing her own future

Flip the page into a story full of imagination as well as new beginnings, and along the way you might just find Bella.

Bella Brunke, senior, has taken inspiration from many books and developed a love for writing throughout the years. In hopes of continuing her writing career, Brunke has made the decision to attend college in the United Kingdom.

“I got the [idea to go to England] very last minute. I had basically planned out what I wanted to do for college and then, in September or August of 2020, I was like, ‘I’m just gonna change this whole [plan]’ because I kind of got to a point in my life where I was like, ‘why not, why don’t I pursue these options?’,” Brunke said.

Although the idea of going to college in the UK was a rather spontaneous decision, one thing hasn’t changed for Brunke: her love for writing. She is planning on attending college in Wales, with a major in creative writing.

“I think a turning point for me was probably sixth grade. My teacher had us write this prompt, it was just nonfiction, wasn’t even creative or anything. And then she read [mine] for the class and said it was really good,” Brunke said. “I was like, ‘man, maybe I should write.’ It just kind of made me realize I’m pretty good at this, I should probably [write] more.”

To Brunke, writing is more than just words on a page, she says; it allows her to express her creativity in a different way.

“I have always liked the way you can twist words and create what you want, because people create whole worlds and people in just 100 pages,” Brunke said.

Brunke’s always writing in her free time, says her friend Isabelle Buccelli, senior, who has known Brunke since the 6th grade.

“She loves being able to do what she loves and what she sets her mind to, so she will be really happy in the UK because she will be able to continue writing which is what she is most passionate about,” Buccelli said.

Brunke has experimented with different writing styles but still hasn’t landed on which one she likes most.

“I have written a couple cute little young adult romances but I think after reading some more adult fiction I liked the idea of creating characters who have real problems. I really enjoy that aspect of adult fiction, and it has more depth than a lot of young adult fiction,” Brunke said. “I have definitely not settled on a favorite, I just like to write.”

Brunke says she hopes to become a full time author starting in the publishing business and working her way up to other possible careers that work alongside writing.

“I’ve written ideas that, further down the line would translate well to TV, which I would really enjoy. Obviously that’s more far fetched, but it’s definitely an option,” Brunke said.

Moving out of the country although exciting can be challenging, but Brunke, having only been to Mexico, says she is excited for this new chapter that’s to come in her life.

“I’ll miss the aspect of having everyone in a place I know because it’s a whole different country, so you’re kind of out of your comfort zone in that sense. But at the same time it’s like, at some point you have to leave your little fishbowl. I’m excited for that aspect of freedom which I guess in a way is why I’m going to a whole other country,” Brunke said while smiling.