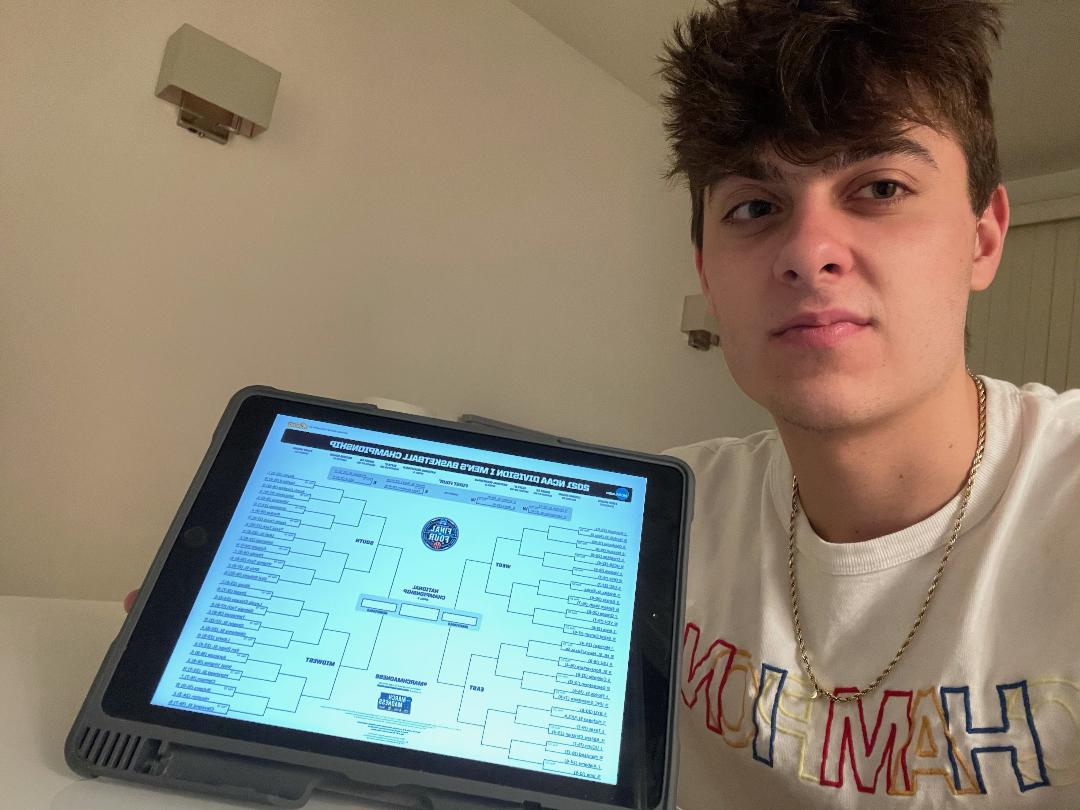 Photo by Photo used with permission of Sam Holtz

ESPN’s March Madness Tournament Challenge and other March Madness bracket games take the sports world by storm each spring, with avid fans attempting to achieve perfection in their predictions. No one has ever obtained a perfect bracket in any major bracket game, but one LZHS senior has gotten about as close as ever before.

Sam Holtz, senior, won ESPN’s Tournament Challenge game in 2015 out of the 11.57 million people who played, earning himself instant fame and notoriety in the sports world. Holtz, who was a 6th grader at Middle School North at the time, predicted 56 out of the 63 games correctly, including all of the teams in the Elite Eight, Final Four, National Championship, and the eventual Champion, Duke.

Six years later, Holtz is sharing his bracketology experience and credibility with the world through his TikTok account.

Dubbing himself the “Bracket Prodigy”, his first video explaining that he will be going through all of his picks and analysis for the 2021 tournament obtained 500 thousand views in 14 hours after he posted it.

What are the odds of getting a perfect NCAA bracket?

About 1 in 9.2 quintillion, according to NCAA.com

“I’ve been kind of bored in my house so I thought it’d be cool to make a video on it [March Madness] and see if it would blow up and maybe people would be interested in seeing my bracket, so I decided to shoot my shot,” Holtz said. His ‘shot’ was a swish and he has amassed 3.2 million views total on 8 videos on the topic as of March 18.

Holtz’s friends were not surprised at all when it went viral, according to Luca Sturm, senior and friend of Holtz.

“He sent me his first video that he posted and asked if I thought it was going to go viral. I said yes and that he should post it as soon as possible,” Sturm said. “ I wasn’t surprised that he obtained such a large following so fast because a lot of people from around the world remember him and his story. I have a lot of trust from his picks because he won the whole bracket challenge before so how could you not trust the man.”

Yet Holtz himself was shocked that his video and account blew up as quickly as it did, he said.

“I literally posted it at noon [on March 11] and by 5pm it was already at 50,000 views. I didn’t think it was gonna blow up that fast,” Holtz said. “Most TikToks [that blow up] get a lot of views, but they don’t get a lot of likes, and there were a lot of likes on it so I figured that the more likes it gets, the more it’s going to keep reaching out on ‘For You’ pages.”

Since the first video, Holtz has gained over 40 thousand followers on the app and posted region by region analyses about the 2021 bracket, as well as game picks, games to look out for, and potential upsets. Holtz has also created a Bracket Pool for himself and his TikTok followers to take part in on ESPN that has since amassed more than 1700 entries all trying to beat the “Bracket Prodigy”.

Holtz says he still gets recognized from time to time as the winner of the 2015 tournament, but his life hasn’t drastically changed since his victory. Even without the potential of winning a bracket pool amongst friends or ESPN’s Tournament Challenge in his case, he still finds March Madness enjoyable due to its unpredictability.

“Filling out brackets is just so entertaining to watch because a lot of these games are while school is in session, on weekdays, and on weekends. Other games are only on the weekends, but March Madness is a full week so there are always games going on,” Holtz said. “You can always just pick up the TV remote and watch a game where there’s always action and there’s so much unknown. It’s so hard to predict so trying to pick that perfect bracket is just so fun to do.”

Games in the Round of 64 begin on Friday, March 19, and culminate in the Final Four and National Championship on April 3 and 5. As for Holtz’s predictions, he advises looking out for Michigan, Illinois, Baylor, Oklahoma State, and Gonzaga to be dangerous in the tournament. However,  he predicts a Final Four of Kansas, Alabama, Baylor, and Illinois with the Illini winning the Championship over Alabama.