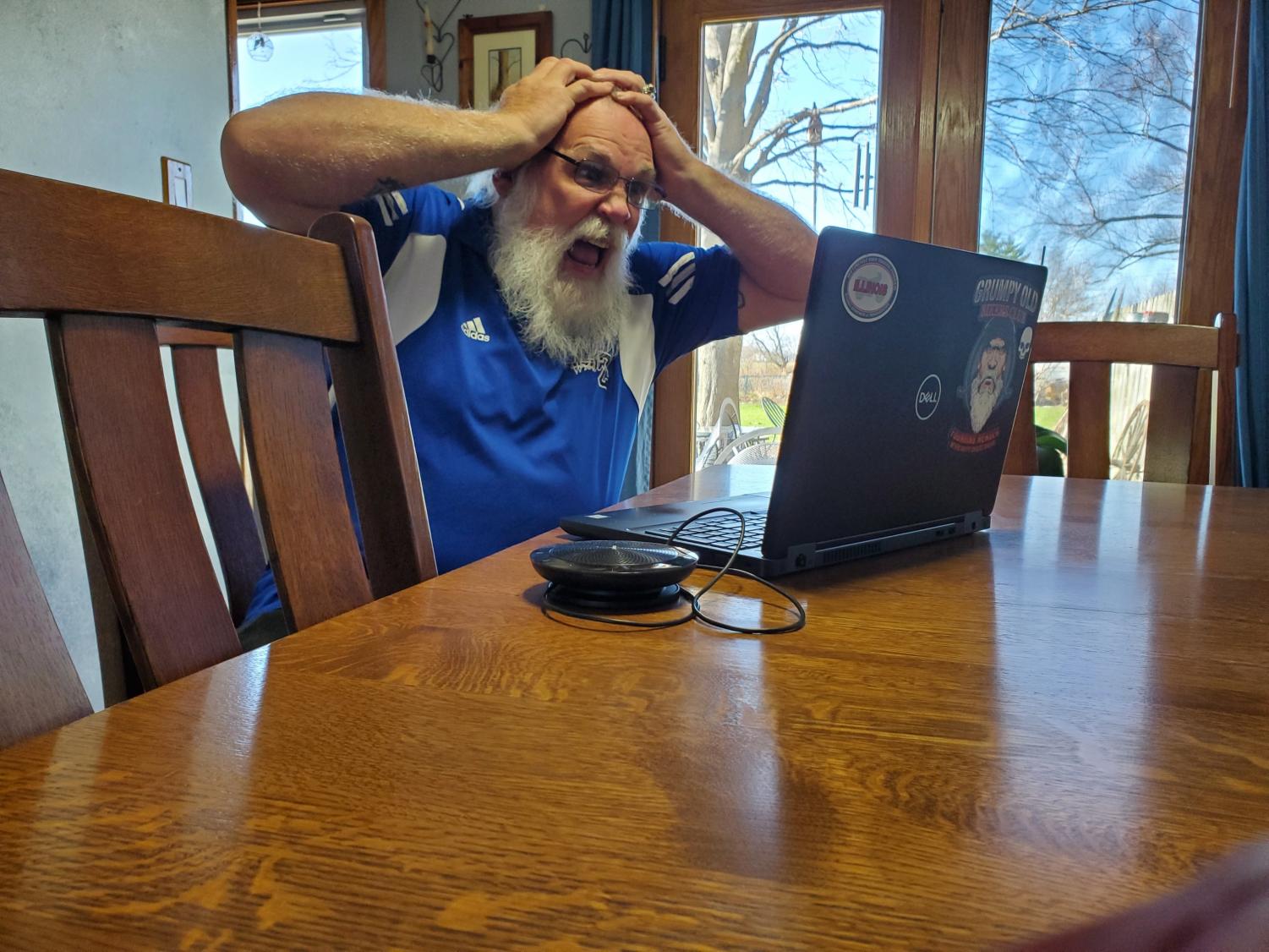 Dan Strickler, drivers education teacher, says adjusting to technology was a challenge at first, especially because he was unsure if the technology would change. “That’s part of why remote learning is so difficult.” (Photo by and used with permission of Dan Strickler)

Dan Strickler, drivers education teacher, says adjusting to technology was a challenge at first, especially because he was unsure if the technology would change. “That’s part of why remote learning is so difficult.”

Photo by and used with permission of Dan Strickler

Remote learning has not been easy for anyone. With brand new schedules, expectations, and learning environments, everyone has had to adjust accordingly. However, this shift has been more difficult for older generations who did not grow up with today’s technology.

“I’m kind of old school, I really prefer that if I have to read something, I have it in my hands. It’s easier to hold a physical sheet of paper, make some marks on it, and just walk to the student and give it back to them. But we can’t do that anymore,” said Robert Moore, chemistry teacher, who describes himself as a “pen and paper guy.” “Now, whenever a student submits something that I assigned over Canvas, for example, it takes all that time to download, and it’s just a more time-consuming process overall.”

These new forms of technology are not only time consuming but ever-changing, especially in the context of the uncertainties of the pandemic. Dan Strickler, driver’s education teacher, says he struggles the most with how quickly technology changes. Throughout his years as a teacher, he says he has seen a handful of different technologies rush into schools and then quickly fizzle out. Due to this, he has a reluctance to put all his energy into these new technologies.

“For example, Mr. [Tom] Reagan in my office does a fantastic job with technology, and for a little bit [years ago] he got into this new thing called Edmodo. He spent hours and hours, and put all this time into making it really cool,” Strickler said. “Then I thought after watching him for a couple of years ‘maybe I should do this as well.’ And he always told me, ‘this will never go away.’ But guess what? It [went away] a year later.”

According to Strickler, technology is always changing and becoming more advanced.  For him, this is the most challenging and overwhelming aspect of remote learning: he now has to keep up with everyone else in the school.

“When Canvas came around I thought that in two or three years from now [Canvas] is going to be called ‘Tarp’ and then something different will come along called ‘Sheet’ or something else like that,” Strickler said. “I don’t want to devote excessive amounts of time with this technology if there’s such a high chance of it completely changing. That’s part of why remote learning is so difficult.”

Moore says he also struggles with how rapid technology changes. It was not until his junior year of college that those “itsy-bitsy calculators” came out. Now, technology has evolved so much that all of society is dependent on it, he says. With these constantly emerging technologies, Moore says he struggles most with keeping track of everything.

“It’s keeping it all straight that’s the issue. There’s so many different screens and buttons to hit, that it’s really easy to miss something. For me, I think the biggest issue is with Zoom and the problems I had with figuring out how to screen share,” Moore said. “I’ll click what I think I need to click and move on thinking I am properly screen sharing, but I’m not. I miss like one or two extra steps and the entire thing falls apart.”

Karen Landen, math teacher, has found that she didn’t struggle too much with the technology, but with building relationships with students. Even though she had “never heard of zoom before,” she quickly got used to it during remote learning. What she hasn’t gotten used to is a screen being in between her and her students, Landen says.

“Reaching out to kids in a remote environment is definitely different. What was nice about the remote learning in the spring was we had all students for almost three quarters. We already had those relationships with kids which was extremely valuable,” Landen said. “This year, it was a little more difficult to develop those relationships, but I am really trying to reach out to my students to show that I care and that I am there for them.”

“I just felt like it was more zeroed into individual students rather than my standing in front of 30 kids,” Strickler said. “My students were having the option to be able to share more about themselves and relate things more personally to themselves. There were a lot of assignments [where] you would create your own rubric. I was much more creative about it.”

Landen has also found reasons to be thankful during the remote learning situation. According to Landen, she feels fortunate that the district is supportive and that she has the means to still connect with all of her students.

“Our district is really fortunate to have what we have. The district provided Pre-K through second or third-grade students iPads if they didn’t have them, which is amazing technology for the students to have, of course. The district also provided hotspots for students who didn’t have stable internet,” Landen said. “If this happened like even 20 years ago, school would have been a bunch of paper packets to do probably through mail. At least this situation happened now.”