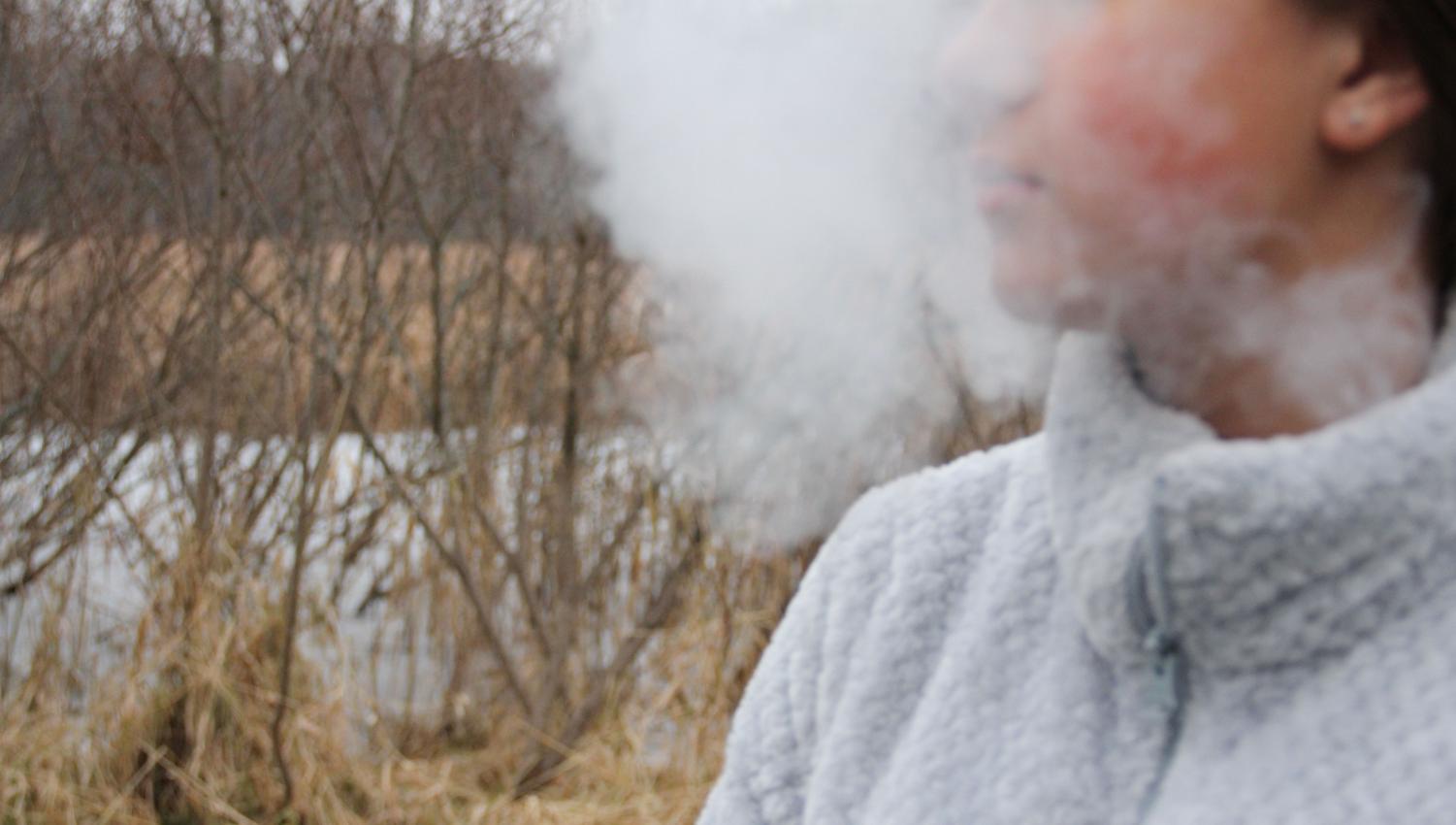 Teens open up about vaping

That means out of eight students, Nick and Ryan*, junior boys, represent this large minority. Vaping was “always kind of around,” Nick said, and they were both introduced to it their freshman year. Vaping was a habit for the two until their junior year, when it became more of an occasional indulgence.

What drew us in

43 percent of young people who tried e-cigarettes did so because of appealing flavors, according to truthinitiative.org. For Ryan, flavor had been a temporary appeal his freshman year, but for Nick, it was “definitely” the social aspect that motivated him instead.

“I never liked the flavor, it always kind of made me nauseous,” Nick said. “[But] it’s a conversation starter at a party [and] a way to interact with people. Freshman year everyone thought it was [cool], but it’s kind of lame, honestly.”

Nick and Ryan eventually tired of the mundane tastes and effects of vaping, until something new entered their circle: THC. According to Ryan, THC cartridges became accessible their sophomore year, which had a higher impact and seemed much more worth it—at first.

Detective Mark Frey says he values connecting with teens in his work, and is both educated and educates on the topic of vaping in the interest of their safety.

“When you’re [young] and introducing things to your body, it’s going to affect you long term,” Frey said. “A lot of times kids are thinking short term; they want to learn things by doing them] instead of taking somebody’s word for it.”

“We try to educate you guys, saying, ‘Hey, this is dangerous, here’s why,’” Frey said. “But then ultimately, you’re going to  make your own decision here.”

E-cigarettes are substantially less harmful than cigarettes, but much remains unknown about their toxicity, according to truthinitiative.org. Nick and Ryan did not learn the health risks associated with THC from any posters, ads, or presentations; they experienced them firsthand.

“When I was 15, I used one of those THC cartridges probably at least once a day,” Nick said. “And I remember, one time I went swimming, and I couldn’t hold my breath for more than a couple seconds.”

Ryan, too, suddenly experienced the effects of THC.

“I hung out with someone, [and as we were] driving around it hit me, [this] weird feeling,” Ryan said. “We went to go play basketball and I couldn’t play basketball. [THC] weakens your body, and you don’t even understand what you’re doing sometimes, but it’s not a good thing to do. I kind of regret doing it.”

Nick and Ryan acknowledge the dangers of vaping THC, but Nick says “all these new sicknesses and lung diseases” are the result of “black market THC cartridges.”

Ryan agrees that consumers need to be aware of how regulation is not the same for all vape products.

“[The diseases are] not from the stuff you buy at a vape shop,” Ryan said, “That’s from stuff you buy off of people, stuff that’s not regulated. It’s the THC cartridges you buy, because now they’re filled with all these horrible chemicals that can hurt your body.”

Vaping, regardless of what it contains, is still linked to respiratory illness and nicotine related health concerns, according to The Wallstreet Journal, but Nick and Ryan say they think the facts have been blown out of proportion.

“Obviously your lungs are only made to inhale oxygen, so inhaling anything [else] is not good for you,” Nick said. “But people smoke cigarettes a pack a day for 50 years and then they die. I think you’re going to be fine if you vape. In the long run there might be some problems, but I don’t think it’s that big of a deal.”

Ryan says that social media and coverage of teen vaping can amplify this drama, sometimes spreading what he views as misconceptions.

“You got Snapchat, Instagram, Facebook saying, ‘oh, teen dies from hitting a Juul,’ but it’s really not [how it happened],” Ryan said. “They were hitting a THC card that probably wasn’t regulated by the dispensaries [and] has chemicals that can probably kill you if you vape once.”

Though typically parents are in the dark, Nick had a “long talk” with his mother about vaping.

“My mom knows I used to use a weed vape everyday,” Nick said. “[She said] ‘you don’t have a mature brain yet, and imagine that everytime you hit the bong there’s a fetus hitting to bong. Imagine how that would be for the brain.’ Stuff like that.”

The conversation had impact with Nick, he says, and afterwards, he decided to moderate his habits. Nick took a long break, and now he vapes no more than on occasion.

Exposure to nicotine among youth has been shown to make young people more susceptible to nicotine addiction, according to truthinitiative.org. It is often asserted that those who vape are more likely to smoke or associate with different nicotine products in the future, especially teens, according to hopkinsmedicine.org. But Nick and Ryan do not see vaping playing any role in their futures.

“There are way healthier things you can do than vape,” Ryan said. “When I’m out of college, I’m not going to go to a vape shop and start vaping. I’m not going to do that. It’s a high school phase, you know? You try stuff in high school, you get into the crowd, you decide to do it or not. But I don’t think I’m even going to do it in college.”

“At the end of the day, it’s just a fad,” Nick said. “People have been doing stuff that harms their bodies since the dawn of time, and it’s not that big of a deal. We don’t need all those crappy YouTube ads about anti-vaping, I think we should just be moving the discussion on to more important topics at this point.”