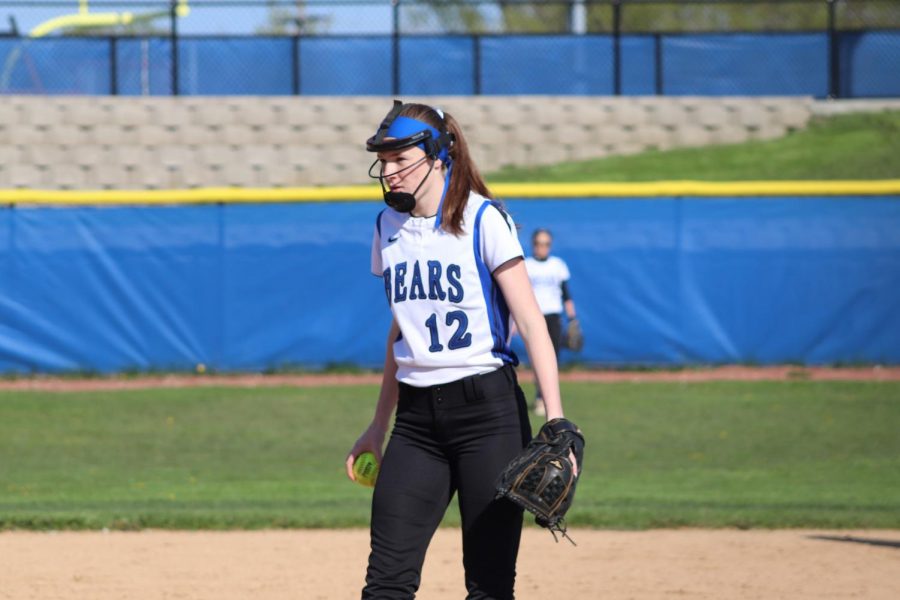 Maura Ginn, sophomore, stares down towards the plate and prepares to pitch during a May 13 game against Mundelein. Sad the team's season ended this past week, but the team will now look ahead to next year.

The softball team was another team that started their IHSA Regional play this past week, and they came away 1-1.

They started their week with an 11-3 defeat of four-seed Crystal Lake South in the Regional Semifinals where Haley Gajewski, senior, drove in four runs. They then looked ahead to Saturday where they faced top-seed Barrington in the Regional final. The game ended in a tough 5-2 loss which ended their season.

The team finished their season 17-11, and will now look ahead to next year and hope to improve upon this one.

The boys track and field team wrapped up their 2019 season this weekend as two athletes qualified for the IHSA State Championship at Eastern Illinois University.

“I was surprised more than anything to find out that I made finals,” Myers said. “Just getting the opportunity to run at such a high level against such talented guys was a great experience and I think looking forward to next year I will be ready to not back down to anyone.”

Now that the team is done with their season, they will look to start training for cross country and next years track season.

The boys volleyball team had their regionals this week, where they played in three win or go-home games in three days.

The week started with the Regional Quarterfinals where the team defeated Mundelein in two sets. In the semifinals, the team faced familiar foe Stevenson and defeated the Patriots in two sets. On Wednesday, the team had the chance to capture a Regional title as they took on top-seeded Barrington. It was a close match, but the team ended up falling in three sets.

The team ended their 2019 season 24-14 and they will now to look to build upon this season for next year.

The baseball team began their playoff push this past week as they played in the Regional round of the IHSA Playoffs.

The team started off in the Regional Semifinals against Deerfield on Thursday where a big fifth inning put the Bears in the lead en route to an 8-5 victory. The team then played in the Regional finals on Saturday as they faced the three seed, Lake Forest. It was a tough game, but the team ended up falling 5-4, ending their season.

The team ended their season at 22-10, and will now hope to improve upon this season as they approach next year.

The girls soccer team was hoping to continue their success this week in the IHSA Playoffs after coming off of a Regional title, but sadly that was not the case.

The team played in the Sectional Semifinals on Tuesday as they took on top-seed and school rival Stevenson. Sadly, the team was unable to fire up any offense as they lost 1-0 to end their season.

The team finished their season 12-10-1. The team will look to improve upon this season’s success next year.

The boys lacrosse team began their IHSA Playoff push this past week as they started their Sectionals on Monday against Glenbrook South.

Unfortunately, their playoff run didn’t last long as the team was eliminated in an 11-6 loss in the Quarterfinals.

The team ended their season 9-8 and 2-3 in conference play. They will now look ahead to next year as this season ends.

The girls lacrosse team also started their IHSA Playoff push this week as they played Glenbrook North in the Sectional Quarterfinals.

The team unfortunately also fell in the first round in an 17-9 loss on Monday night in Northbrook.

The team finished their season 7-12 overall, and 2-3 in conference. Now the team will be preparing for next season with hopes of improving.

And that’s a wrap for the 2018-2019 #lznation athletics season. Want to relive every moment from this year? We’ve got that right here!