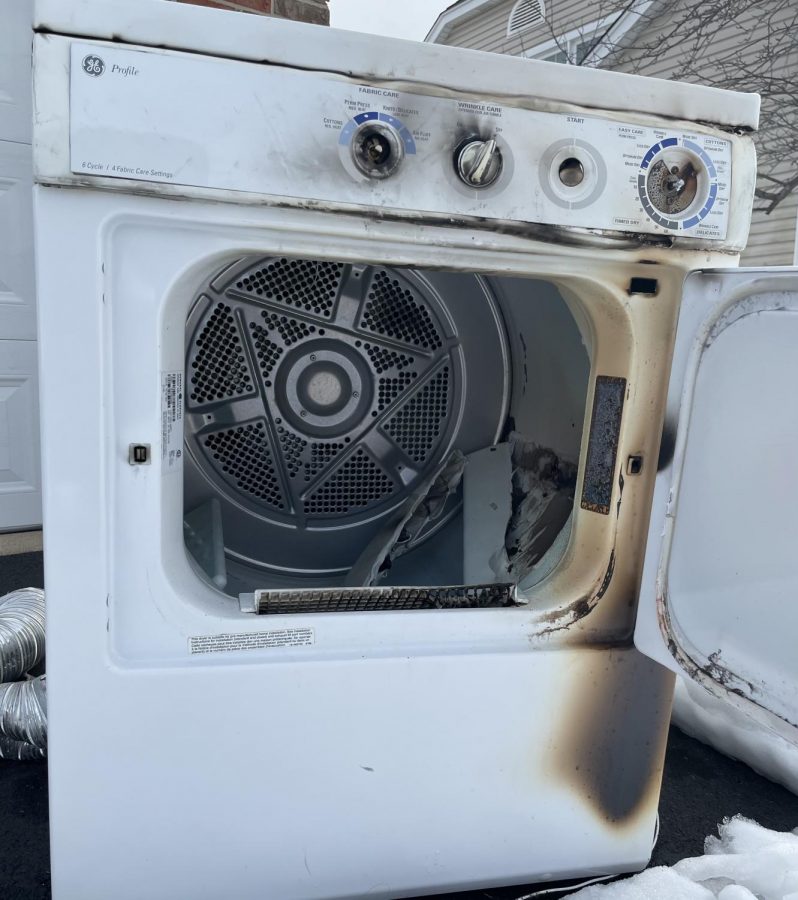 Fires can be a scary thing, let alone one that can result in total property loss. Everyone should keep in mind how easy it is to have a fire start and remember to keep dryers clean.

Fires caused by dryers are something everyone should keep in mind. I learned that the hard way. My house was damaged in a fire that started in the dryer on January 13, and if anyone saw a burnt dryer in a driveway somewhere in Lake Zurich, that’s probably my house.

I never could have imagined my family would have a fire in our house. But it turns out, according to the National Fire Protection Association, dryers and washing machines are actually a common cause of household fires. Washing machines and dryers cause 15,970 fires a year, and a whopping 92% of them are caused by dryers.

The good news is I’m fine, as are my family members and our 2 dogs. But it was a scary experience and one that can happen to anyone in LZ. We should all acknowledge the dangers of keeping our dryers cleaned. Nobody would want to go through what I am going through now.

I was taking my Chemistry test during second period on a Wednesday. I was trying hard to concentrate on my test when I started to smell something weird and smokey. It smelled like someone was burning leaves, so I didn’t pay attention to it. But then the hazy smoke started to get my attention as the smell got stronger. Smoke seemed like it was coming from the vent right in front of my feet. Just then, my mom and dad hollered at my sister and I to get outside. It really didn’t hit me that they were making us get out because our house was on fire.

So, being the nerd I am, I took my iPad because I still had to press submit on my test, then I grabbed my phone and my dogs, and sprinted outside. My parents had called 911 after they noticed pitch-black smoke coming out of the dryer. It turns out they thought at first that the dryer was fine, just that it was a little smoky from overheating, but when they saw smoke began to billow profusely from the dryer a few minutes later, they knew the situation was dangerous.

The fire department arrived about 5 minutes later with a huge fire truck. By then, my neighbors had started to come out of their houses wondering what was going on. The firefighters did a great job finding out what had happened and broke a hole from inside of the house to outside to make sure the fire hadn’t spread anywhere in the walls. I am really thankful and lucky that they came quickly. The fire easily could have spread to the entire house; maybe even our neighbors’ houses.  If no one had been at home, our house would’ve been burnt to ashes. I realized afterward that this could happen to anyone and that fires are a very real thing.

After the fire, my parents were busy talking to insurance and the fire department about how to fix everything. The hole that the fire department had made was the size of my foot, but had created cracks in the wall. The fire department had almost used their water system, which would have demolished part of the house. The fire had started because the vent that catches lint was not cleaned and the dryer had been overused, creating more heat. The only real thing that burned was the dryer and some of my clothes.

However, the smell of the smoke that came from the fire was pretty bad. It smelled very toxic, not like your regular campfire. My family and I started to get headaches and we were experiencing chest pain. Whatever we tried to do to get rid of the smell did not seem to work and we couldn’t do our laundry. The insurance company and inspector told us that we would have to move out for at least a couple of weeks to get our house repaired, and everything in it cleaned. This included repainting walls, washing clothes, appliances, and everything else you could think of.

According to dvwfranchise.com, small fires cause up to $20,000 in damage and larger ones can result in total property loss. $238 million is spent each year on about 16,000 fires. That’s about $15,000 per household.

Thankfully, our costs are being fully covered by insurance. Although it’s been almost a month, a full expense list has not been accumulated so it’s hard to say exactly how much has been spent, only that it will be quite a sum.

Because a couple of ounces of lint caught on fire, I am now staying at a hotel for roughly four weeks. It’s been tough and I can’t wait to get out. I have to share a room with my sister during the day while we’re both e-learning, which is terrible because I have to have earbuds in all the time and I have to be quiet most of the time. I feel like I’m missing something all the time. This would have been much better, but because of COVID-19, we can’t eat out and we’re stuck inside a small room.

We can’t move around whenever we want and worse, my sister doesn’t have a desk to use, the wifi is unstable, and I feel claustrophobic. Nowadays, whenever I watch or see the news, I find myself worrying about fires that happen to others because I know it can be a terrible feeling to watch your house burn. It’s been a very stressful month and I can’t wait to go back.

So please, do not overuse your dryer and clean it!