Parents, teammates and coaches shape athlete into who he is today 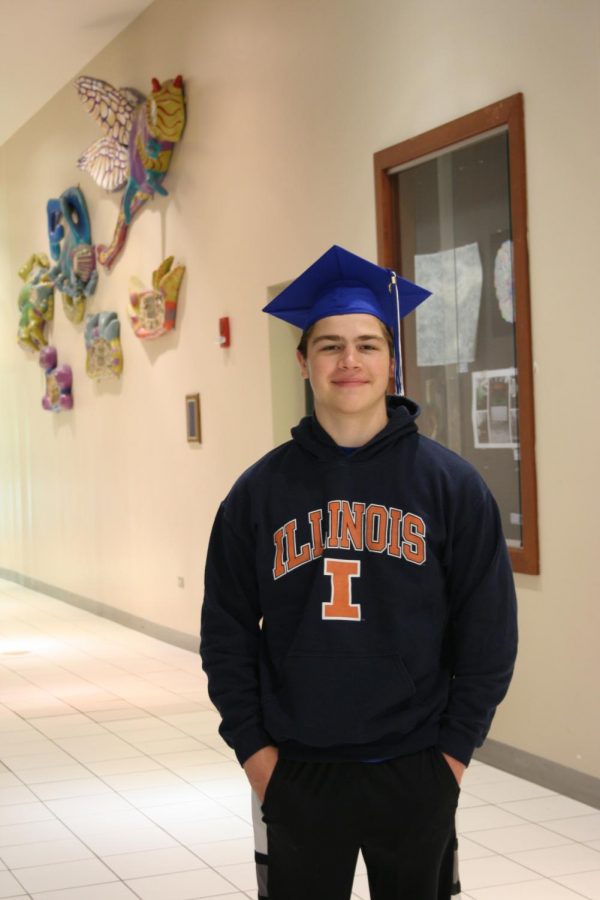 Aaron Zurcher, Senior wears a University of Illinois sweatshirt to show where he will be heading to college.

After 14 years of training and competing in gymnastics, senior Aaron Zurcher has ready to call it quits but the lessons he’s learned encourage him to keep working towards his goals.

Over the past 14 years, Aaron has learned to follow a routine that accommodates for all of his activities. Being a gymnast has taught him one of the most important lessons that he has learned: time management.

Like most athletes, Zurcher says he has “learned it is important to balance homework and athletics,” but he has also learned about love and decensey.

Zurcher’s parents helped to teach him the lessons of time management by encouraging him to be a gymnast, from a young age. His mom would sign him up for ‘mommy and me’ classes because, “when I was a toddler, I would climb stuff a lot and I loved to climb on everything,” Zurcher said.

His parents were one of his biggest supporters, but they were not to only ones. He also had the support of many coaches and teammates, throughout his gymnastics career.

Zurcher credits his coaches for shaping him into the person he is today. They have taught him not only how to be a better gymnast, but also a better person.

“We try to teach them that there is a future and once you leave sports and  school, you have to be a good human being and be able to survive in the real world,” John Karmecy, Zurcher’s coach, said. Learning how to be mature, how to work with others, time management, how to accept responsibilities and be in control of your actions, we kind of wrapped into one.

Zurcher’s coaches have spent many hours training and working with him in the gym. They have seen lots of skills and improvement in him, stating that “Aaron was a very hardworking and dedicated kid.” Although he was also described as, “wanting things to be perfect. If it didn’t go his way he would like to try over and over again,” Karmecy said.

In addition, the lessons that Zurcher has learned were not lost. One of his closest friends and teammates of over 13 years, Paul Juda notes that he shows those values everyday.

Juda said, “the friendships that you make really are the reason that you guys can succeed together. When you have someone like Aaron, I can really rely on him to always get me through a tough practice.”

Juda and Zurcher have become very close, as they practiced together almost everyday and they attended many competitions together.

“Aaron for me, has really been my rock,” I can always rely on him to make me laugh. We are always pushing each other to the max. We yell at each other, cry to each other,” Juda said.

Together, Juda and Zurcher have been role models for the younger kids, of the gym. As being the oldest, they found it important to be leaders. “You gotta always focus on being the best you, you can be for the kids,” Zurcher said.