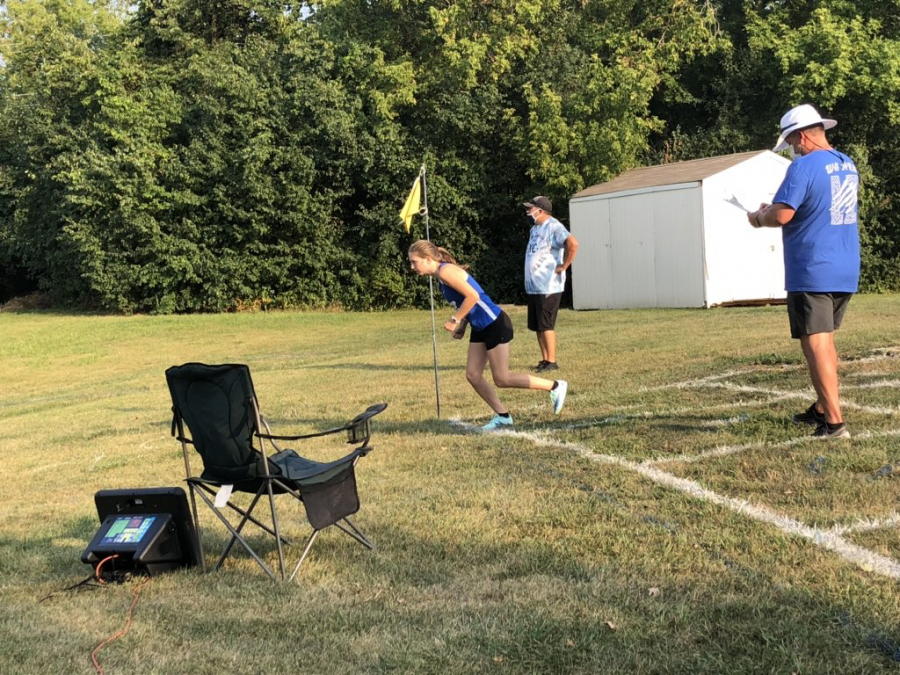 A Girls Cross Country team member gets set to start her race at a meet in the backfield of the school. Each runner starts the race individually this year as a result of COVID-19 and then the teams compare times at the end to determine the winner.

For student-athletes in Illinois, many did not find out if they were going to have a season until a week before the season started. And when they did find out, it was to discover their sports would operate differently from prior years.

The IHSA made some changes to the fall sports season, moving the football, boys soccer, and girls volleyball seasons to the spring due to COVID-19. However, three sports classified as low-risk are continuing to play this fall: boys and girls golf, boys and girls cross country and girls tennis.

Due to the circumstances, Bear Facts is temporarily suspending sports recaps. Instead, with the decreased volume of games/meets, we will be publishing two roundups per sports season: one to fill you in on changes that have been made to the sports and one to summarize their seasons.

The defending Regional and Conference champion Boys Cross Country team is poised to make yet another postseason run this fall as they are returning five All-Conference runners from last year.

The team started the season with a home dual versus Libertyville, with the major change for this year being that the team’s home course is on-campus, rather than at Lakewood Forest Preserve. Each runner starts individually and time is used to determine place and score, according to Kevin Loftus, junior.

“[This season] is much different because Cross Country is a very social sport, but now that is limited,” Loftus said. “Races are more of time trials and are very mentally tough. The competitive nature of meets is much different because only after when comparing times do you know how you compare to the other team. It is a guessing game because now you don’t even watch the other team running.”

The team will only participate in dual meets this fall until the postseason, which the IHSA has yet to confirm will occur.

The Girls Golf team is set to have another jam-packed season of matches and tournaments as they teed off a few weeks ago.

Some of the early season competitions include the Libertyville Tournament, as well as head-to-head duals against Libertyville, Warren, Carmel, Mundelein, and Lake Forest.

The team will continue to play mostly conference duals for the rest of the year, as IHSA has yet to confirm the State Series.

The Boys Golf team looks to be having a very strong season thus far and is setting themselves up to make a run and the Conference Championship.

The team started their season off strong with a 10-stroke victory over Libertyville at Lake Barrington Shores led by a 35 from Zach Lawler, freshman; a 39 from Bennett Haidu, senior; and a 40 by Dylan Howell, junior.

“A highlight of that [Libertyville match] was beating them by 10 strokes because that was the first time in a while that we have beaten them,” Howell said. “Some of the protocols are the requirement of wearing masks unless you are at your ball and getting your temperature checked regularly. This year is extremely different than last year.”

The team will continue to play their conference duals and aim at making a postseason run and making a run at Conference powerhouses, Stevenson and Lake Forest.

The Girls Tennis season is underway as the team prepares for their first match on September 8 against Waukegan.

The guidelines of masks and temperature checks also apply to tennis this fall, like all sports, and masks can only be taken off when playing, Karlie Schwichtenberg, senior, said.

“This year feels super weird and different because we barely have any matches,” Schwichtenberg said. “It’s hard to adjust to how strict the protocols are.”

The team will also be playing in mostly conference duals as they await the IHSA’s decision on a Postseason.

The Girls Cross Country team is back and running as they started their season a couple of weeks ago with a victory over Libertyville.

Brooke Johnston, sophomore and defending conference champion, and Kristin Loftus, junior, led the way placing first and second in the dual. The duo’s performance led the team to a 24-31 victory over the Wildcats.

“Just having the opportunity to actually compete and race is a highlight by itself,” Ginger Mirabelli, senior captain, said. “This year feels extremely different. For school, for sports, for everything. As far as cross country, it is challenging because the normal that we are so used to can’t exist anymore, like starting a race with your team or trying to catch up to another runner during a race. But ultimately I am glad that Lake Zurich is taking a very safe approach to sports because that just means that though we may not have the same traditions, we can still race and have a season.”

The team has only conference duals on the schedule at the moment and then the North Suburban Conference meet, and they will wait to hear what the IHSA decides about the postseason.

Missed on all of the #lznation sports news from the Summer? Catch up right here!