Too much to do, too little time 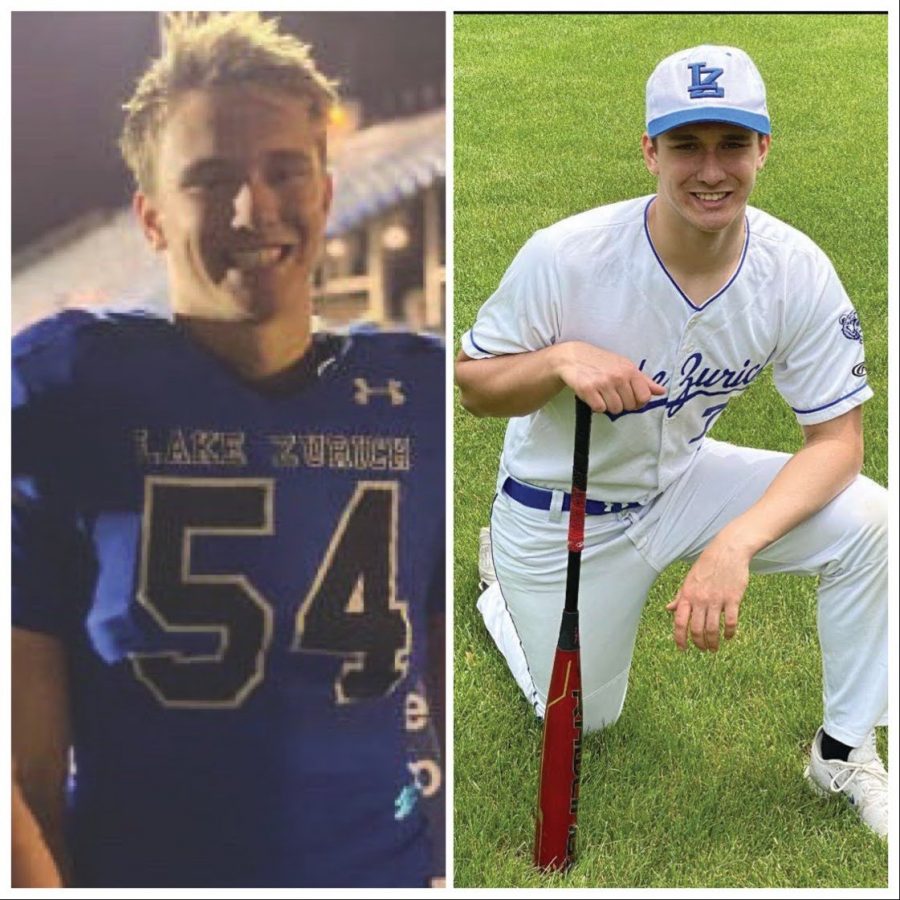 and used with permission of Logan Griglione

Logan Griglione, junior, was given 1 day of off time between football and baseball seasons this Spring. This is a massive change from the typical 3-4 months of off-time in a normal year between the two sports due to IHSA schedules for the 2020/21 school year

After a year without large-scale school athletics, almost every sport is being jammed into one semester to make up for lost time, leading to inevitable conflicts and overlap between seasons. Normally this is not an issue for multi-sport athletes, but due to the rearranged schedule, some athletes are having to make difficult decisions to play one of their sports or find a way to juggle their athletic commitments.

Coaches are understanding of this fact, Scott DeCaprio, baseball coach, said, as coaches realize that time is of the essence for athletes.

“I feel bad for some of the kids who have said, ‘hey, I just can’t completely commit to another sport,’ and I get it,” said DeCaprio. “I told everybody to play other sports as much as you can. For us, if it’s something that you feel like you can’t commit to, I’m not against anybody [prioritizing one over the other]. I want them to do what’s best for them.”

From a coach’s standpoint, DeCaprio says he understands that it is not just about the baseball program itself. He encourages student-athletes to play as many sports as possible because DeCaprio says he wants athletes to make the most out of their high school careers especially during the pandemic.

Logan Griglione, junior, is juggling two sports at once. He is finishing up the end of football season while hoping to be a starter on the baseball team. At the same time, he is playing with his summer league baseball team in the evenings, making it difficult to complete school work. With this large time commitment, Griglione says he has had his doubts.

“There were definitely a few times where I questioned myself if [it] was a good idea to do both [sports],” Griglione said. “The main reason I decided to do both was thanks to my awesome coaches supporting me, and helping me figure out schedules that allowed me to [play] both sports.”

Griglione believes the overlapping seasons may have an impact on his performance in the beginning of the season. Football is a strenuous sport that comes with a lot of injuries, and overuse might cause some minor setbacks when he transitions to baseball. Despite the physical demands, Griglione says he feels prepared for baseball

“I do have a few concerns with no break [in between seasons], but after COVID, I’m really just happy to be playing sports, in general, this year,” Griglione said.

Max Hilton, senior, is also participating in two sports at once. His soccer season is coming to an end, and shortly he will be committing his time to baseball.

“My dad really thought I should just concentrate on baseball this year but I still wanted to play soccer since it is my senior year,” said Hilton, who is playing on both school teams this spring. “I alternate between the two sports unless one or the other has something important like a game that I prioritize.”

Although it is possible to participate in multiple sports this spring, some athletes decide that their best course of action is to choose one sport for the spring and come back to their other sport later. Amelia Young, junior, has been a three-sport athlete throughout high school playing volleyball in the fall, basketball in the winter, and softball in the spring. Earlier this year, Young completed the basketball season but the volleyball and softball seasons occur in an extremely similar time frame. This was previously not an issue since volleyball normally occurs in fall and softball in the spring, but Young decided that choosing to only play softball this spring was in her best interest.

“I decided to not play (volleyball) because this year has been so hectic, and the coinciding schedule with basketball and softball would already make my days extremely busy,” Young said.
However, Young acknowledges that this schedule is temporary and plans on returning to the sport in some capacity for her senior year.

Athletes have been assigned the task of choosing what sport is best for them this spring, no matter what that decision is. Overall, the crammed end of the year for student-athletes has been worth it, according to both Hilton and DeCaprio, as it allows athletes to still have the opportunity to play should they choose to.