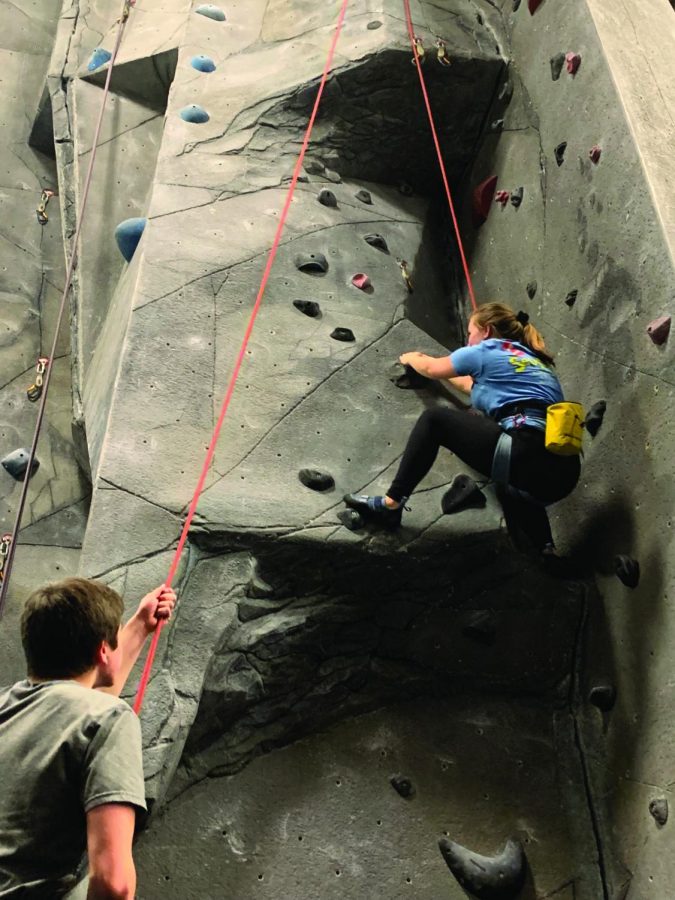 Technical theater students continue on the tradition of rock climbing. The group has a passion for rock climbing and has many fond memories together.

As technical theater students build long hours for the upcoming plays, musicals, and concerts, a group of students relieve their stress through rock climbing. These students spend many hours over the weekend climbing difficult courses and making special memories along the way.

Rock climbing provides a sense of achievement and thrill for Jora Pugliese, junior, and seniors, Brad Szywala, Bryan Slaughter, and Charlie Frampton. To this group of stage crew students, climbing is an exciting sport and Sywala emphasizes that “it sparks joy” and “it’s a whole bunch of fun”.

Their excitement is evident in the way that they play off each other:

Pugliese: “I used to be afraid of heights, but now I’m not as much because I get to go up 30 feet in the air.”

Frampton: “Sometimes you’re climbing with someone that doesn’t know how to belay. Then you fall like 6 feet.”

Szywala: “One time my friend dropped me like 10 feet. It’s just fun. I like climbing up and looking down and saying, ‘Oh my god I made it this far,’ and I did it all by myself.”

The rock climbing tradition started from Rachel Moore, 2019 graduate and the former Technical Theater Club president, who suggested to take the group to climb. Pugliese states that the climbing group started like a “domino effect”. A group of graduating seniors went climbing and convinced another group to go, where they discovered their passion. They continue to climb to see themselves improve after each course.

The group agrees that rock climbing is a sport to improve and learn new skills:

Szywala: “One, you see yourself improving. Two, you get to hang out with your friends. It’s a good workout and it’s something completely different than running,”

Pugliese: “The courses are rated so you can see as you improve, the ratings go up,”

Slaughter: “The courses change every so often so it’s not always the same thing,”

For Szywala, his greatest achievement and best memory of climbing was when he overcame a difficult course. A scale, the Yosemite Decimal System, goes from a scale of 1 to 5, with 5 being the hardest course because the courses are nearly vertical.

Frampton says he favors the bouldering course for its difficulty. Rather than utilizing the ropes, the climber can only use their arms and they are up 30 feet in the air. The courses are all at different angles, making it more physically demanding.

“We went up to the bouldering course. I thought bouldering was fun and enjoyable because that’s really difficult especially if you climb with just your arms instead of your legs and arms. Those are harder decimals,” Frampton said.

When someone is passing the group of students down the hallways, one can hear the phrase, “On belay?” and “Belay on!”. One can assume the phrase is an inside joke, but belaying refers to a variety of techniques climbers use to exert tension on a climbing rope so that a falling climber does not fall very far.

“I think climbing for me is just like a fun way to get exercise. Running on a treadmill? Eh. But climbing a wall? Fun,” Pugliese finished.

The group looks forward to the climbing days every weekend. With the workload of building and preparing for the musicals and plays, they love spending time on an activity they equally enjoy and are benefiting out of.

The group reminisces the fond memories of their journey to the rock climbing center:

Szywala: “When we get the climb day going, it’s so much fun. The climb is a blast.” Pugliese: “Steak-and-Shake after we climb.”

Slaughter: “Driving hours to get there.”