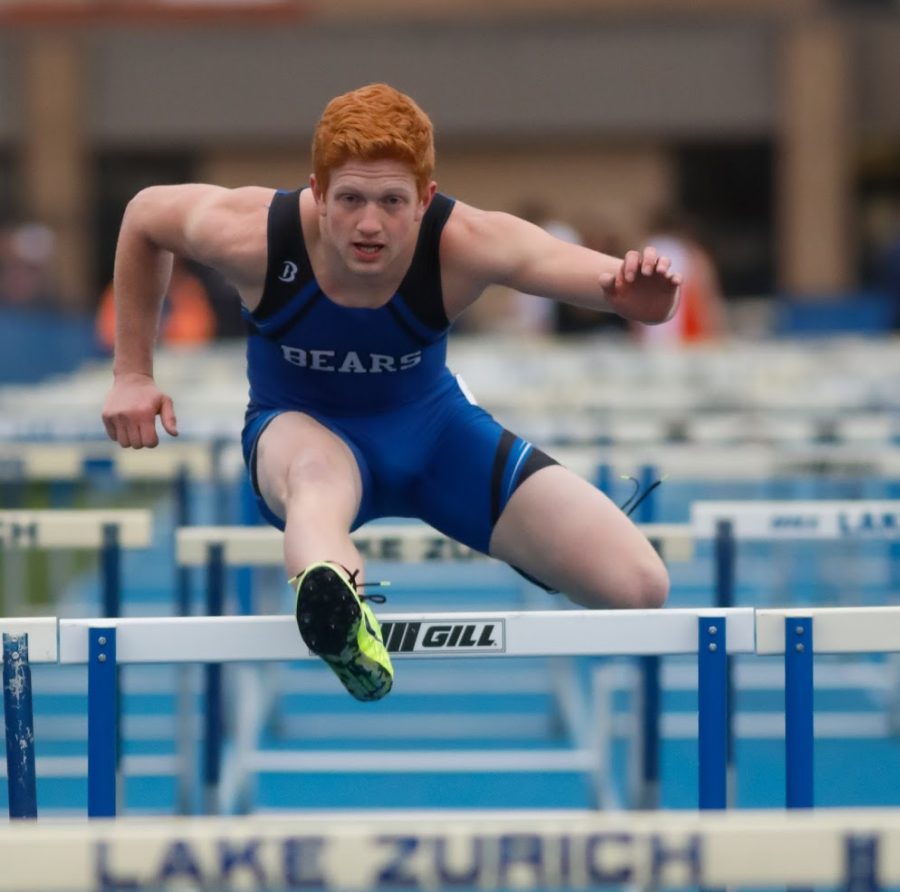 Marek Enters, senior, dashes over the hurdle in the 300 meter hurdles at the Bear Invite on Thursday. Enters came in third in the event.

The boys’ track team had a very busy week as they hosted the Bear Invite, and then the distance team competed in the Distance Night at Palatine High School.

This week will feature duals against Libertyville and Lake Forest, and then they will go and compete in the Glenbrook North Relays.

The boys’ volleyball team had their busiest week of the season last week, as they played eight games in six days.

The week started out with a 2-0 loss to Palatine on the road on Monday, which was followed by a 2-0 loss at Stevenson on Wednesday. However, the week turned around quickly as the team competed at the Palatine Tournament over the weekend.

The three victories clinched the team a spot in the semifinals for Sunday. In the semifinals, the team was able to defeat Glenbard North in three sets, which secured a spot in the championship against the host Palatine. The Pirates were able to win in straight sets, handing the Bears a second place finish out of 16 teams.

The team will now have a lighter schedule for the week, as their only matches are against Glenbrook North on Monday, then against Libertyville on Wednesday.

After coming off of a hot weekend for the girls’ soccer team with a tournament victory, the team attempted to keep their win streak rolling.

The team’s only game of the week came on Tuesday against Zion-Benton. The game ended very quickly, as the team put up a ridiculous number on the board against the Zee-Bees, winning 8-0.

The team will get another light week, but the opponents should not be taken lightly, as the team will take on Stevenson and Lake Forest.

The boys’ lacrosse looked to get back on track this past week after a couple of losses in the previous games.

The team started the week off strong and was able to put together a 9-3 victory over Mundelein on Wednesday. The momentum continued to Saturday where the team was able to get a big shutout in a 12-0 victory over Marist.

The team will now get set for a busier week than of late, as they will play three games at home against Lake Forest, South Elgin, and Evanston.

The girls’ lacrosse team had a very exciting week, with both of their games ending in close scores.

The week started with a tight loss to Conant on Tuesday by a score of 11-8. The week continued in the other direction as the team was able to put together a 12-10 victory on the road at Mundelein.

The team, now 4-4, will hopefully continue to grow as a team to improve, according to Anna Aipoalani, sophomore. The goal for the team the rest of the season will be to “really mesh as a team and to know how each other plays,” Aipoalani said.

The team will continue their stretch of road games this week as they will face York and Lake Forest on Monday and Wednesday.

Another excitement filled week for the baseball team has undoubtedly sparked some confidence heading into the bulk of their conference schedule.

The week started off with a huge 7-0 shutout of school rival Stevenson, as a big complete-game on the mound by Noah Deluga, junior, led the way. As the team looked to sweep the Patriots for the week, the game eventually ended in a 5-2 loss for the team.

The team would then prepare for a doubleheader at home against Schaumburg on Saturday. Game one ended in a tight 3-2 victory in a low-scoring affair. Game two ended in a similar fashion, as it ended in a 1-0 victory.

The team, now 4-1 in conference and 11-5 overall, will look ahead to this week which features two games against Libertyville on Monday and Tuesday, and then one against Highland Park on Friday.

The softball team looks to be turning their recent losses around, by finishing this week with two strong victories.

The week started off with a couple of tough losses. A 7-2 loss to Mundelein, and then a rough 10-0 loss to Warren. By the end of the week, it seemed that the team might be turning things around as a doubleheader at Vernon Hills ended in two victories. Game one was a tight one that ended 8-7, and game two showed signs of the bats getting going again in a 21-16 victory.

This week seems similar to last week as the team will play four games. They will play Waukegan on Monday, Zion-Benton on Tuesday, and then a doubleheader on Saturday against New Trier.

The girls’ track team had their week pick up steam in a hurry as they competed in the 18-team Glenbard West Invite on Saturday.

The team ended up placing seventh out of the 18 teams. Notable results include Kelsey Rothas, junior, winning the pole vault, Izzy Klett, junior finishing second in the long jump, Sydney Mark, senior, coming in second in the 400-meter dash, and Teagan Jones, junior coming in third in discus.

This week will undoubtedly be a busy one, as they will have duals against Libertyville and Lake Forest on Tuesday, and then they will host the Lake County Invite on Thursday.

The match ended in a 6-1 loss, with the only point coming from a victory in doubles in straight sets.

The team will now get set for an extremely busy week against Libertyville, Warren, Cary-Grove, and Mundelein.

Another week means more #lznation athletics, and we’ve got you covered for everything that goes down on the track, court, or field right here!