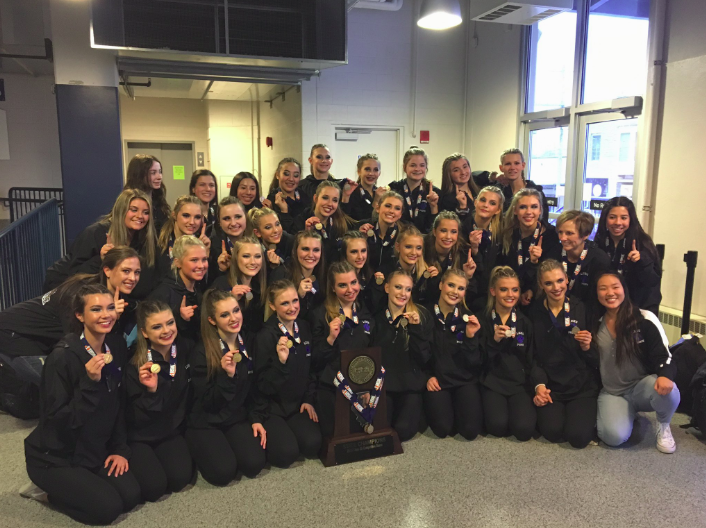 The team poses with the state championship trophy at Grossinger Motors Arena in Bloomington on January 26. This championship is the second consecutive state title for the team, and the second one in school history.

In an effort to improve the quality of the Bear Facts website, we will be starting weekly sports recaps about what has happened to all of our sports teams in the previous week. Keep checking back for more Weekly Roundups and other great content regarding lznation.

The Poms team started the season out to repeat as IHSA State Champions, and at Grossinger Motors Arena in Bloomington on Saturday, they did just that.

The girls started on Friday by dancing their way to a score of 95.68, which secured their spot in the finals on Saturday, where they improved their score to 97.42 en route to a second consecutive state championship.

“I was honestly so shocked to hear that we had won state for the second time in a row. I was just so happy and grateful,” Cassidy Pirron, senior captain, said. ”Back to back wins shows how truly dedicated we are to what we do. It is not easy at all to win state and it takes a lot of time and dedication to get the routine to the place it needs to be.”

The hardware doesn’t mean that the team is done yet, as they will travel to Orlando next  to compete at UDA Nationals, where they placed fourth last year. The will travel with the goal of outperforming themselves at state, Pirron said.

After placing seventh at state last year and having six returning bowlers, the team looked to improve upon last year’s state result and they did just that by finishing the season strong with a  fifth place finish in this year’s state championship.

After starting day two of competition in ninth place, the boys fought their way up to fifth with the help of seniors Billy Schroeder and Trevor Madura who both knocked down over 2500 pins over the two days.

Another highlight of the tournament was a perfect game of 300 by Jason Morrison, junior, on Saturday.

Lake Zurich has become a bowling town. With the Boy’s team placing fifth at state, don’t forget about the girls, who also had a big weekend.

The next step for these champions is onto the IHSA Postseason starting at Conant next weekend, which is the first step at hopefully echoing the boys team’s success.

The cheer team competed at IHSA Sectionals on Saturday the 26th at Grayslake North High School, where they placed 6th out of 17 teams in the Large Team division.

Unfortunately, the team came up just short of advancing to the IHSA State Championship in Bloomington next week. With a Sectionals score of 86.27, the Bears would’ve needed an extra 1.21 points to advance, as the top five sectional finishers advance to State.

Although the season has now come to a close, the squad will look to build upon this year and make it back to state next year.

The girls gymnastics team competed at the NSC Conference Championships on Thursday the 24th, where they placed third as a team in only their second year of existence.

“The team did a wonderful job showing how to persevere,” Chelsie Grotelueschen, head coach, said. ”We had a rough start on balance beam, and the girls came together to encourage one another to leave that event behind and move forwards and do awesome on the other events.”

The wrestling team faced off versus Warren and Waukegan this week, fighting their way to victory over Waukegan, but also falling to Warren.

The team also competed in the county meet this week, with some highlights being freshman Ethan Medina going 4-1 and finishing fifth in the 195 lb. division, and senior Christian who worked his way up to fourth place after going 0-2 in the same tournament a year earlier.

The JV squad finished conference with championships in the 138, 152, and 160 lb. divisions by Carter Groebe, sophomore, Johnny Clancy, junior, and Dan Hull, freshman. The varsity team will now have their eyes set on the IHSA Postseason tournament at Dundee-Crown for Regionals next week.

In the Grayslake North game, Ella Gilbertson, junior, led the team with 15 points en route to a 41-29 victory and the team’s fourth in a row.

However, against Lake Forest, Gilbertson’s 14 points and senior Maddy Piggott’s 10 points weren’t enough as Lake Forest won 48-36. At this point, the Bears are now 12-13 on the season and 6-4 in conference heading into next week with a marquee matchup versus Stevenson.

The team hosted the annual Lake Zurich MLK Tournament last weekend where the team took third behind a last second put-back to give the Bears the boost it needed to beat Palatine 53-51 in the third-place game.

In the games following that intense finish, the Bears unfortunately fell to Waukegan 84-76, and then to Lake Forest 53-40.

However, the Bears will get most of this week off of games to rest and prepare to face Zion-Benton on Saturday at Zion-Benton.