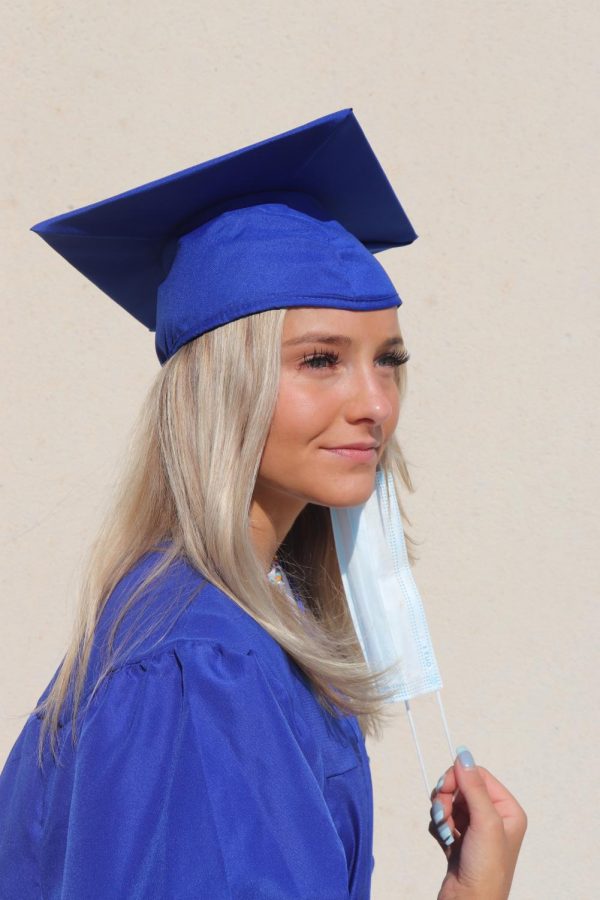 With the year being much different than usual, seniors reflected on what they hoped for their senior year and how their expectations were altered.

The class of 2021 unknowingly glimpsed a forecast of their own senior year when they watched the class of 2020 finish high school remotely last spring. Everything that it means to be a senior—from cheering in the front row at football games to Decision Day to prom—was precariously uncertain, yet still seemed possible last school year.

Now, seniors are reflecting on the expectation vs. reality of their senior year, and how the pandemic affected their lives academically, socially, and emotionally. They learned to be flexible and struggled to stay motivated from home as COVID redefined what it means to be a senior.

“As a freshman, I thought I would be saying ‘go home, freshmen’ as a senior in the stands at a football game, but obviously that’s not the case.”

When LZHS switched from a block schedule (with half of the normal amount of classes every day) to the full-day schedule back in October, the seriousness of the pandemic really sunk in for Michelle Katz, senior.

“I even have videos of it on our last day of school, March 13th […] and we’re all jumping up and down,” Katz said. “When the school schedule changed I was like, ‘oh my gosh, we’re really not going back, we’re doing e-learning for the rest of the semester.’”

“It was really hard to adjust to doing zooms,” Katz said. “That was very draining just because we’re in front of a screen for like eight hours a day. That must have been the biggest adjustment that I’ve had to make.”

But throughout the hardships of the pandemic, Katz says she has learned an important life lesson: “balance is key.” She learned how to set aside quality time with her family, while also balancing school.

“I think when doing schoolwork and managing the social life, I didn’t really have a clue or sense on how to balance those two,” Katz said. “I think that COVID and the pandemic in general really taught me that.”

“As a freshman, I thought it would be kind of a top of the hierarchy, king of the castle type experience, but it’s really not been that way at all.”

“I’ve gotten kind of jealous seeing all these freshmen in school and they’re all hanging out in the cafeteria […] it seems like they have a lot but it’s like, I wish that was me,” Short said. “I walk through the hallways and I see the freshmen where the seniors were standing, and there’s way more freshmen than seniors, and it’s just kind of a reversal.”

Short says the most emotionally draining part of the pandemic has been the realizations about how much COVID impacted the school year as a whole.

“It’s just been such a different year, mostly for the worst, I’d say. I mean I think there’s a few things that have arguably been better but I think even last spring, it was all so new and no one really knew what we were in for,” Short said. “But just realizing how limited certain activities have been and […] classic high school’s gone.”

Despite these disappointing changes, Short says he found new things to appreciate during the pandemic. He says the most meaningful thing he’s learned has been the value of face-to-face human interaction. One of his favorite memories from quarantine was doing a birthday car parade in early May for one of his friends, Short said.

“One of my buddies had an early May birthday, and I’d been in lockdown for however long it was, a month and a half by that point,” Short said. “[I] got to see a lot of people I hadn’t seen in a long time, so that was a really great feeling and it was spring and warm and it was pretty cool.”

Short’s biggest takeaway from the pandemic has been learning flexibility because of how rapidly and frequently things changed during the pandemic.

“Even if you think you know what a year from now is going to look like, the reality is you might not know what’s gonna happen in the next hour,” Short says. He will take his ability to “think on the fly, work on the fly, and adapt to certain situations” to college with him in the fall.

“I had a lot of senior friends when I was a freshman. I remember they had so much more fun. [Senior year] was supposed to be a more fun and sociable year but then the pandemic hit. I think [the pandemic] really kind of cut that [fun] off,” Tognetti said. “When I was a freshman I remember seeing seniors having so much fun and it was kind of like they were less stressed out. I feel like it was more boring [for us] to be honest. It’s just I expected a lot more.”

After COVID hit, Tognetti said he had a lot of time to reflect and change his perspective. The pandemic was like a fresh start for him, according to Tognetti.

Although the pandemic was a great learning opportunity for Tognetti, it took a slight toll on his mental health, he said.

“I’ve become more like a homebody and I don’t really do that much anymore and I feel like I just don’t really care. My motivation levels have gone down,” Tognetti said. “I feel like if we were going to school [normally], I’d have more motivation but since we were at home most of the year, I feel like that kind of took a toll on me, as well as I feel like more tired now.”

After experiencing the pandemic, he has gained a lot of wisdom he hopes to take with him to college, according to Tognetti.

“I definitely have been more open-minded and have been trying new things and I feel like doing so in the future too. I feel like I can adapt now,” Tognetti said. “I think being able to adapt and change in difficult times [has been one of the biggest takeaways from the pandemic].”

As someone who describes herself as constantly busy, Simi Pugazenthi, senior, said the pandemic forced her to slow down and reevaluate what was meaningful for her.

Though Pugazenthi says the pandemic was emotionally draining, it was also eye-opening.

“Losing friends was the most draining part [of the pandemic] for me.  As we weren’t seeing each other as often, we drifted apart and it was hard to see that so many people didn’t really care about me,” Pugazenthi said. “Now I take a step back and reflect on what I’m doing and how I’m doing it, and who’s beside me when I’m doing it, to make sure that I’m using my time properly instead of just wasting it.”

Despite the uncertainty caused by COVID, Pugazethi says she is optimistic for college.

“I think COVID messed up a lot of my plans for college, like where I wanted to go, and things like that,” Pugazenthi said. “The application process this year was really messed up because of the pandemic, I don’t think that I could have predicted where I’m going to be next year, but I’m excited to see what’s in store.”

“I was really looking forward to senior year to be a good leader in band and having fun with my friends being the big seniors in the band that everybody knows that I used to look up to when I was a freshman,” Michael Zaucha, senior, said. “In the hallways being seen as a senior and just having that sort of pride and feeling of superiority that comes with being older and a senior, it sort of feels like we lost that.”

Zaucha says he missed his last year of band camp as it “was always a fun highlight of [his] years throughout high school” that he lost along with his last school dances and football games.

One of the biggest things Zaucha says he feels he lost for his senior year was getting to spend time with his friends and other students.

“I think we take for granted all the time that we get to spend with people, especially during the start of quarantine when everybody had to be isolated,” Zaucha said.

“I feel like that’s a part I missed from school where the teacher and the students would be able to talk and then there’d be some sort of back and forth and it would bring some brightness to school but now the school days just seem to be very monotonous,” Zaucha said.

Outside of in-school experience, Zaucha says he didn’t get to do other senior activities that correlate with transitioning to college.

“I wasn’t able to visit colleges that I was going to apply for to get a feel for them, and that would have helped me in my decision-making process,” Zaucha said. “I think I would have liked to see some colleges and explored the campuses to see what a normal school year would feel like.”

Zaucha is trying to “make [his] peace with” a senior experience offset by the pandemic.

“Senior year was kind of taken away so that’s very unfortunate,” Zaucha said.  “But you’ve got to take what you can get and just be grateful for what you can make of it and find there’s always good parts to be found in there.”

“I definitely looked forward to having that kind of like a fun, memorable senior year but being at home, being on screen, not always being the most sociable person, you kind of miss out on that being in a class where all the screens are off or maybe you’re falling behind and you have to catch up,” Brian Gertie, senior, said.

Despite being unable to experience the classic senior year, Gertie says he found other ways to compensate for the lack of in-person interaction..

“I have a small group of friends and at one point we did school together,” Gertie said. “We all met up in the morning like it was a normal school day, brought our badges that you have to have when you go [to school] in person, and had our school-away-from-school.”

As a senior, a large part of what Gertie says he lost his last year of high school was having a camaraderie with teachers that he was unable to have as an underclassman.

“The relationship you have with teachers your senior year is something I looked forward to since freshman or sophomore year, getting to know all the teachers in the school and being able to accumulate a close-friends type of relationship with them,” Gertie said.  “It’s not easy to create that kind of atmosphere at home.”

Although the pandemic took away opportunities to forge the same connections with people he would have had in a normal school environment, Gertie says people should value each other more than ever.

“I feel like it’s important to be grateful for the people in your lives and show them a little appreciation because we don’t always do that in everyday life,” Gertie said.  “In this pandemic, it’s been good to be there for one another so we should continue that, even when there isn’t a pandemic.”