Seniors participated in Senior Assassin with hopes of winning $600 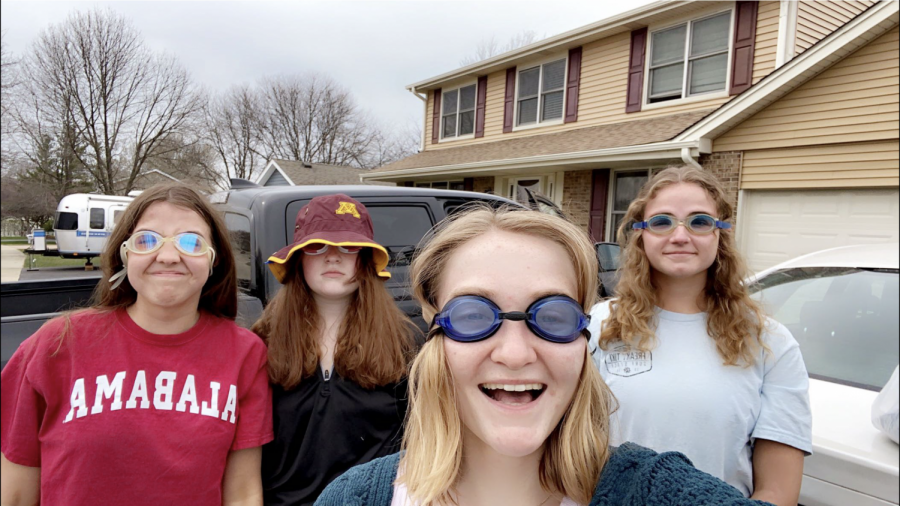 A few LZ Senior Assassin participants, geared up with waterguns and goggles. With over a hundred seniors participating, Luca Sturm, senior organizer, called the event a huge success.

Seniors killed off the last few weeks of high school with a game of Senior Assassin, and the winner got to take home a cash prize of over $600.

Senior Assassin is a game in which everyone participating is assigned a target and their goal is to squirt that target with a water gun by the end of each one week round. If someone does not eliminate their target by the end of the week they get eliminated. Everyone has immunity if they are wearing swim goggles and floaties, except during the purge period where even goggles and floaties can not protect the target from the assassin, according to @lzseniorassasin page on Instagram.

Luca Sturm, senior, organized the entire game and said although the planning and organizing of the game was a bit overwhelming, he was glad to see the response Senior Assassin got from the entire senior class.

“[Senior Assassin] has just been great, a lot of the seniors loved playing and had a really great time,” Sturm said. “My favorite part was just watching all the videos of people getting assassinated.”

Sturm says he got the inspiration to start this game after seeing other schools.

“I saw a bunch of other schools doing it so I decided to try to set the game up for our school. I got everything set up through the Bear Den Instagram and just asked people if they wanted to play, and it just went from there,” Sturm said. “I decided to take on this responsibility because I’ve been doing a lot of stuff for the school and I knew no one else was going to do it.”

The winner of Senior Assassin was Ellie Root, senior, and she said her strategy was simple but effective. Root successfully eliminated her competition and took home the $611.13 cash prize, she said.

“I just patiently waited out my targets and had help from other friends,” Root said. “When I got Cole [second place winner of Senior Assassin] out it was a relief because I was scared of him following me and wearing the floaties and goggles in public for [weeks] on end was way too long.”

Although the game kept her on edge, Root says she “assassinated” her last two targets in the same way.

“For both of the final kills I walked into LA Fitness with goggles, floaties, and my water gun, waved to the front desk worker, and then walked by without being questioned about what I was doing,” Root said. “[Overall] my favorite part was the satisfaction of getting people out.”