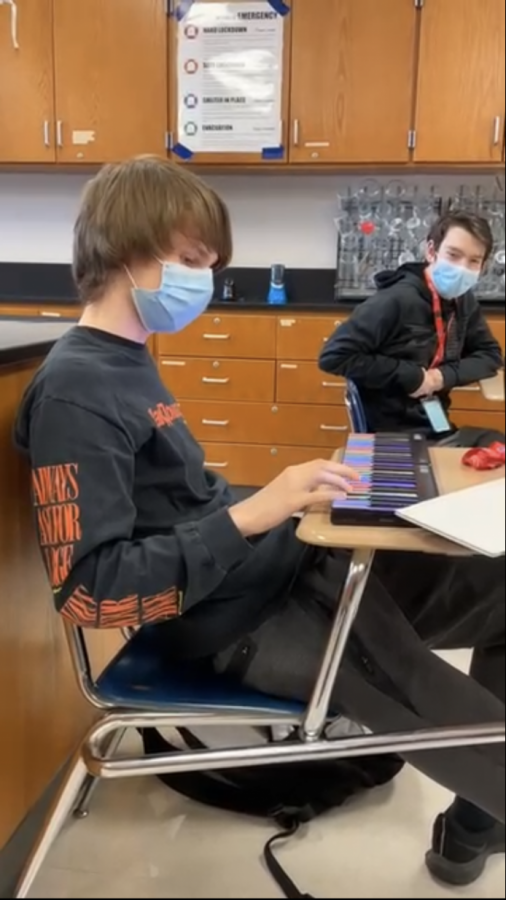 and used with permission of Shreya Pothi

Nikko Gajowniczek, junior, entertains himself by playing piano in his AP Chemistry class. However, Gajowniczek says this distraction pales in comparison to the distractions at home that in-person school has helped him get away from.

In a mostly-wrecked school year, students say they are finally seeing a light at the end of the tunnel. Eased by health and safety measures the school is implementing like mask-wearing and sanitation guidelines, nearly 75% of the student population has returned to in-person learning according to administrators.

Despite a largely defunct senior year, many seniors who are returning to school say they are excited to end their last year of high school in a more traditional way. Ava Tognetti, senior, who returned to fully in-person learning on April 7th, says one of the main reasons she switched was to gain some closure.

“I genuinely had a really good high school experience, and I made a lot of school friends and long-time friends here. I wasn’t ready to just have junior year be the end of it. I wasn’t ready for that to be where the memories stopped,” Tognetti said. “I wanted to be able to have something to look back on in senior year, and being able to talk to people I might not have ever seen again makes me feel good about that.”

While students say they were happy to see new faces in person, some had some concerns about packed lunch rooms and a lack of social distancing. Shreya Pothi, junior, says the school often contradicts itself with its policies.

“They enforce social distancing rules in the classroom and PE like you can’t sit within 3 feet of a person. But in the hallways you’re bumping into other people,” Pothi said. “I go to Studio C for lunch, and one time Mr. Aiello yelled at us for not sitting in spots with QR codes, so I guess they’re taking it seriously, but nothing has really changed. I can still reach over and touch my friend if she reached her arm out. It’s still like a normal classroom.

Even though “there’s definitely a risk” of contracting the virus, Pothi says that she still wants to attend in-person school. With most of the town already in contact with one another, people are more likely to contract COVID elsewhere than at school, Pothi says.

“Half of the people forget to wipe their desk down. If you’re in arms reach that’s definitely not six feet, and without masks, there’s definitely a risk of contracting the disease,” Pothi says. “But I don’t ever feel like I’m gonna contract it, because I hang out with my friends outside of school anyway. And when I am at lunch I usually sit near my friends and if there’s someone else next to me I won’t be talking to them. I feel like it’s worth the risk, since you’re shopping at the same shops, and everyone is already mixing anyways.”

Nikko Gajowniczek, junior, who returned when the school first gave the option for full-time learning, says he has the same opinion. One way Gajowniczek tries to reduce contact is to “put my mask back on the second after I take a bite.” Despite the tough situation in the lunchroom, Gajowniczek says the improvements to his grades far outweigh the minor safety risks.

“At home, there are so many distractions. I can just go and do whatever I want while I’m on zoom, I can play Minecraft if I want to,” Gajowniczek said. “But I [can’t do those things] in school. So it just helps me focus more and do my work.”

Besides the lack of distractions, the in-person school has helped with grades in other ways, Tognetti says. The face-to-face interactions in school do more than create memories – according to Tognetti, they give a huge advantage to understanding concepts.

“I definitely have more interactions with teachers and I’m able to obviously ask more questions and get more help than I did at home. Being able to interact with people has been really helpful,  keeping an advantage with school in addition to the closure I wanted at the end of senior year before leaving. You’re just able to utilize the things in school that you weren’t able to utilize at home.”

Although changing learning environments has helped Tognetti specifically with schoolwork, she says the higher number of people in school has benefits for everyone.

“I’m actually really happy with the turnout of how many people are back to school and I feel like that will help make the end of the year really great,” Tognetti said. “And I think that’s going to encourage more people to just stay in school, instead of just falling back into going home because it’s an easier route. I honestly feel like people just be super motivated and encouraging to others, and I hope this will help everyone stay at school.”